Several new and would-be parents are crying foul over Tung Shin Hospital's policy that sees a paediatrician on call, instead of a chosen paediatrician, attending to a newborn upon delivery.

It is a talking point among parents who claim the policy by the Kuala Lumpur-based private hospital would mean paying for the services of a doctor which is not of their choice. Parents alleged the paediatrician of choice is only available after the baby is discharged.

Some of these parents have welcomed their newborn while others are anxiously waiting for the arrival of their bundle of joy. They all insist they should have the right of choice as they are paying for the services.

For the record, the hospital's administration had put up notices of its policy at its premises. 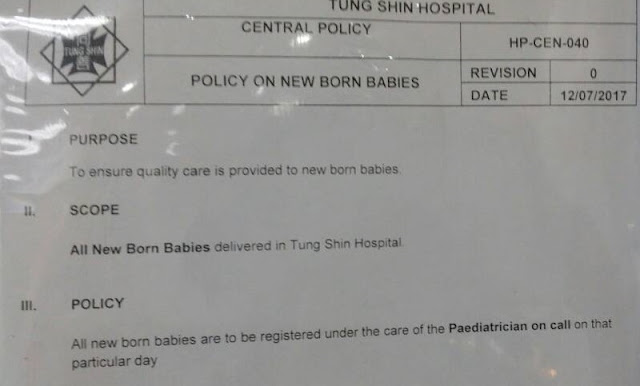 Upon clarification, new mothers and/or new parents were informed they will be able to see their paediatrician of choice for their babies' following check-up.

1. Kueh Choon Leng, 35, IT manager
"My wife gave birth recently. I was informed that a doctor on call would attend to my baby instead of the one I chose. I objected but the nurse said it was the management's policy. I did not cave in and insisted having the doctor of my choice attending to my baby girl and they relented. I don't understand why such a policy exists in a private hospital. They are charging me for a service rendered by a doctor who I don't know, leaving my wife and I uncomfortable. I was informed about this policy by my wife's gynecologist during the later stage of her pregnancy and you don't expect us to change doctors at that point in time. I just hope they look into this."

2. Goh Chui Teng, accountant
"I'm due to deliver my baby on Oct 11. I've raised this matter and even contacted the hospital's customer service, asking for an explanation. They can't seem to give me a reason why the hospital is adopting such a policy. We are here because we believe in the doctors of our choice."

3. Katrina Mooi, 35, housewife
"I admit there is a notice (concerning this policy) just outside my gynecologist's clinic. But I wasn't happy with the policy. I was not satisfied with the service provided by the paediatrician who attended to my baby. I had wanted to exclusively breast feed my baby but was told that my baby had low blood sugar (neonatal hypoglycemia) and was fed with powdered milk. No one consulted me. I have no issues with Tung Shin Hospital ... everything was great, except for this policy and incident."

4. Tee YC, 28, engineer
"My first child was born on Sept 1. The nurse, had on the same night, informed my wife and I that a paediatrician on call will attend to our baby. We weren't too happy about it but we didn't want this to come into the way of our special day. I was later informed my baby has low blood sugar and was only informed of his situation the following day. I admit we were informed about this policy by our gynecologist."

The Health Ministry has been alerted to this matter. The ministry's Private Medical Practice Control Section wrote to Tung Shin Hospital (on August 22), asking for an explanation. 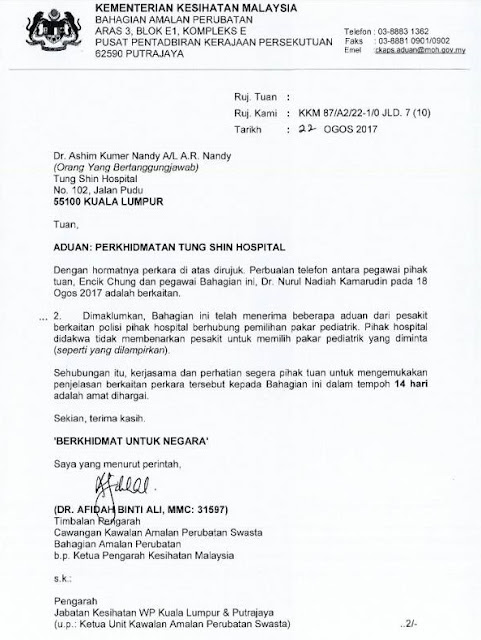 And this was Tung Shin Hospital's (August 29) reply to the ministry. 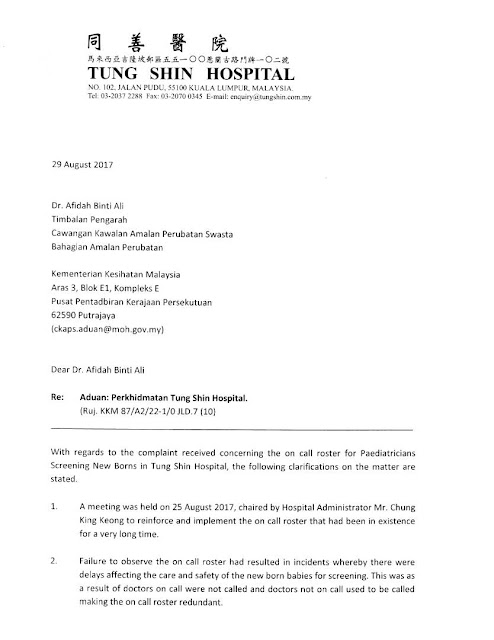 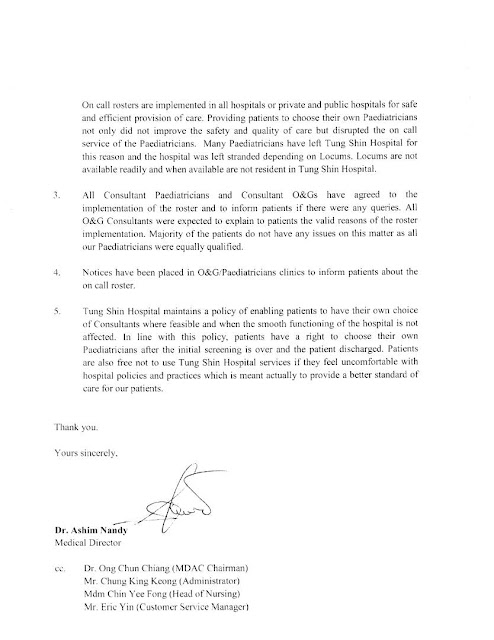 Former Malaysian Medical Association president Datuk Dr NKS Tharmaseelan, said private hospitals were ethically obliged to respect the paying patients' and/or customers' wishes as to the choice of their doctors. He admitted there was no specific law governing this area.

One can also raise concerns over legal issues should something untoward happen to a baby if he or she was being attended by a doctor which was not of the parent's choice.

Hospitals adopt policies or regulations that best serve the interests of their patients and administration (and/or operations).

Also, patients and would-be patients have the ultimate choice of seeking medical help from other private establishments if they are unhappy with such terms.

It is best that a reputable medical institution like Tung Shin Hospital engage with their customers/patients and come up with a win-win situation for all.
babies kuala lumpur new parents paedetrician private hospital Tung Shin Hospital