Another gymnast to fall? 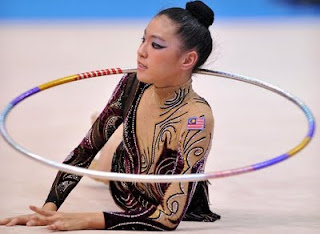 We all still remember Ng Shu Wai now don't we.

The Taiping-born was said to have "discipline woes" and was "too demanding". Shu Wai refuted such claims and added he did not see eye to eye with certain individuals.

Mind you he was a silver medalist at the Doha Asian Games in 2006.

Apparently she's not in good terms with the national coach and has avoided contact since. Read today's Mailsports.

What's more interesting is the way those who manage the national gymnastics scene talk. They tend to answer questions with "So?" or "And?". They also question "who told you?"

For the benefit of those who did not read the article.

KUALA LUMPUR: National gymnast Elaine Koon raised eyebrows after bagging the nation's 10th gold medal at the New Delhi Commonweath Games last year.
Her exploits - bagging Malaysia's first gold medal in an individual (hoop) event - was seen as a revival of the local gymnastics scene which last made an impact at the 1998 KL Commonwealth Games.
However, Elaine could be staring at a dark future.
While Elaine is currently nursing an injury and have opted out from training, Mailsports learnt that the gymnast does not see "eye to eye" with national coach Elena Kholodova. Due to a supposed "altercation" Elaine is not too keen to return to the national stable unless there is a change in the coaching set-up.
Elaine is said to even used her studies as an excuse to not compete at the year end Sea Games in Indonesia. Those close to Elaine, however, believe that she is "unhappy" and could "quit for good". Efforts to contact Elaine proved futile.
"This is the problem with those running gymnastics in the country. The gymnasts are always targeted not the coaches or the officials. Ironically, it is the gymnasts that win medals," said an insider.
Another source added;
"I hope this will not be another Ng Shu Wai incident. Elaine has a bright future ahead of her."
Asian Games silver medalist Shu Wai was dropped from the national set-up after he was alleged to have demanded for training stints in Canada and wanting to train on his own. Those close to him were aware that Shu Wai was also having problems with the coaching staff then.
MGF, nevertheless, claim they are unaware of this episode.
"Minor problems between coaches and athletes are normal but I don't think there is anything major. If she had a bad relationship with the coach, she would not have done well at the Commonwealth Games." said MGF secretary N.Shanmugarajah.
Shanmugarajah insists they have not received any formal complaint from Elaine or request to change coach. This was also confirmed by the National Sports Council.
"If there is any problem, we are willing to listen," he added.