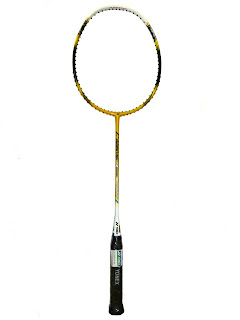 But a good Samaritan decided to spend that amount on the racquet world No 1 shuttler Lee Chong Wei used to defend his All-England title recently.

The proceeds will go to the Hope and Smile 3-11 Earthquake and Tsunami fund raising campaign.

The exact amount raised has yet to be revealed. A quick check with the organisers state; "We're in the midst of calculating the overall funds received".

Among the other items auctioned off included;

It's all good...in the name of charity.

Astro Arena's Shaukei Kahar even announced - live on tv - NST writer Ajitpal Singh's upcoming wedding dinner on 11 Dec. It was due to a joke Norbakti Alias, Shaukei, Ajitpal and I had shared earlier