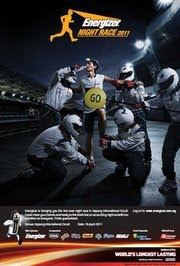 I had some bak kut teh earlier this morning with the company of a former Member of Parliament and several friends when we spoke about the Energizer Night Race held last night.

"It was not their best. In fact last year's run was even better bro," was the response of one of the runner, while muching his food.

I know that the Standard Chartered KL Marathon also faced some "hiccups" during its inaugural year.

But the organisers of last night's race received the wrath of the runners as seen on their facebook account here.

The most latest posting was by Joannita Zaleha Yusof who said;

"Steve Low"
Sincere apology to anyone who went to their office at 3 just now, really sorry! The meeting was relocated to a coffeehouse nearby, requested by the organizer at last-minute, as they said they were only OK to meet our group privately and not anyone else. Our guys(some VIP journalists for papers) managed to make them promising us a RM3000 cheque on monday(refund for 60 of us who have collectively signed)!
30 minutes ago via iPhone · LikeUnlike · "

From BoycottENR page. What about the rest of us? The 9940?

I wonder who are the VIP journalists?

HD says: I love running alongside my golden retriever - day or night.