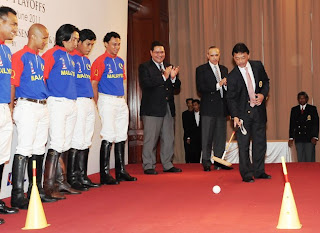 History is within Malaysia’s reach when the draw for the FIP Polo World Cup 2011 Zone D Qualifier was made at the Palace of the Golden Horses.

In the seven-team Qualifier, Malaysia need to finish in the top three to play in their first ever FIP Polo World Cup Finals which will be played in San Luis, Argentina from Oct 11-25.

Originally set to be an eight-team tournament, which will also serve as the Asian-Australasian-African Championships, it will now be a seven-team affair following the last minute withdrawal of Singapore. Singapore has pulled out as it is unable to raise a team for the championships.

Based on past credentials Australia, South Africa and New Zealand will be the front runners to qualify for the World Cup Finals but Malaysia are not ruling out their chances against the strong polo playing nations.

Other strong contenders for a berth in the Finals from the Zone D Qualifier include India and Pakistan, both with rich polo playing traditions. Nigeria is considered a “polo minnow” but it cannot be written off in the Qualifier and could spoil things for the front runners.

Malaysia will go into the fray well prepared with good exposure in training and competitions, both locally and internationally. The national team will play in two important tournaments – the Malaysian Open Polo Championships which begin tomorrow and the Terengganu Open which is scheduled for next month.

“Do not rule out our chances. We are as good as any other team,” said Shaik Reismann, the captain of the Malaysian polo team.

“We are well prepared to face the tough challenge in this tournament. Malaysia has put in lot of efforts in preparing for this meet. This team has come a long way since it was assembled last year.

“The training has been tough and so were the tournaments that we participated in as part of our preparations. Our next big meet is the Malaysian Open Polo Championships and this will be followed by the Terengganu Open.”

Royal Malaysian Polo Association (RMPA) president Tengku Abdullah Sultan Ahmad Shah, who is also the Crown Prince (Tengku Mahkota) of Pahang, believes that the Malaysian team to the Qualifier is “well blended with experience” to throw in their challenge.

“It is a tough group when you have strong polo playing countries like Australia, South Africa, New Zealand, India and Pakistan competing for the three tickets to the World Cup Finals,” said Tengku Abdullah.

“But it stops at that. As hosts, there are several plus factors for us and we should turn that into our favor. I have faith in this team and I am optimistic that we are capable of a top three finish to make the trip to Argentina.

The Zone D Qualifier will be played at three different venues – the Royal Pahang Polo Club in Pekan, the Putrajaya Equestrian Park in the administrative capital of Malaysia and the famed Royal Selangor Polo Club from June 11-26.

The finals will also be played at the Royal Selangor Polo Club.

While wanting to make polo history by qualifying for their first ever Finals, Malaysia, who have earned a world-wide reputation as “good hosts and organizers” in world events like the F1, badminton, hockey and football, are also serious contenders to host the 2014 FIP World Cup Finals.