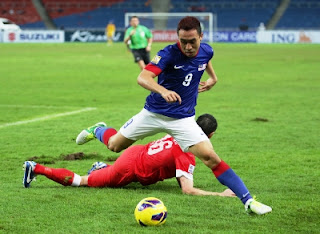 Those were the words of national coach K.Rajagobal right after Malaysia lost 3-0 to Singapore in the AFF Cup last night.

Rajagobal was clearly dumbfounded with the scoreline but defended his players despite their rather poor performance on the field.

Singapore skipper Shahril Ishak scored a brace while 'veteran' Aleksander Duric scored the final goal of the night as the national lads were left in tatters.

"To be honest, a draw would have been a fair result. Yes, Khairul (Fahmi Che Mat) made a mistake..everyone makes mistakes. The team came back in the second half but we didn't score," said Rajagobal.

"We started positively but our play was marred by sloppy defending."

At the last edition, Malaysia were whacked 5-1 in the opening match against Indonesia but bounced back to win the tournament.

When asked if the same could happen again, Rajagobal had this to say;

"It was different then. Singapore didn't score pretty goals but we lost.

"I hope to see Singapore in the final," he added.

"Firstly, I'd be happy with a 1-0 win anyway. The defenders did a good job today and it was a psychological advantage that motivated the other players," said Avramovic.

"It's good that we started this way. Now we need to keep our heads down and continue to play the same way against Indonesia."

In the curtain raiser at the National Stadium, Indonesia were held to a 2-2 draw by a gritty Laos team.

Indonesia skipper Bambang Pamungkas admitted Laos was the better team of the night but was quick to add that he will motivate his teammates when they play Singapore on Nov 28.

"This is my fifth AFF Cup and perhaps my last. I will do all I can to motivate the players. It doesn't matter if I play or not but I will want to see them rise and win our next two matches," the former Selangor player added.