KL gets easy draw in National Under-14 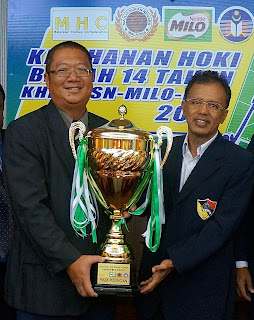 Five times champions Kuala Lumpur were given a relatively easy draw for the MHC-NSC-MILO-MOE National Under 14 Championships that will be held in Seremban from November 16-25.

"We are grateful to be given an opportunity to host the tournament and assure the teams that we will leave no stone unturned in order to make their stay here a memorable one," said Dato Halim.

"And I hope that our team will deliver their best in the tournament and try emerge as champions."

The city side have won the tournament since its inception in 2007 and will be gunning for their sixth title. They have been placed in Group A with the likes of Kelantan, Pahang, Johor, Perlis and Selangor.

Each participating team will receive a total sum of RM3,000 as subsidy with Nestle contributing RM2,000 and National Sports Council RM1,000.

Hosts Negri Sembilan are in Group B together with losing finalists Terengganu, Perak, Kedah, Sabah, Malacca and Penang.

The only state giving it a miss for the second consecutive year is Sarawak.

Coached by former juniors coach Balbir Singh, Negri exposed their team in the MHF-MILO-NSC Junior Hockey League Second Division and could reap dividends from the exposure.