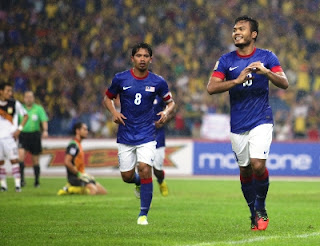 Malaysia defeated Laos 4-1 in the second group match in the AFF Cup.

Both teams were tied to a 1-1 draw in the first half. The goals for Malaysia came from Safiq Rahim, Safee Sali (pic), Wan Zack Haikal and Khyril Muhymeen Zambri.

So will we now see a video of 'fans' singing 'Thank you Rajagobal'?

It will certainly be an interesting clash between Malaysia and Indonesia this Saturday.

HD says: What say you?