What is the Sports Development Act 1997? 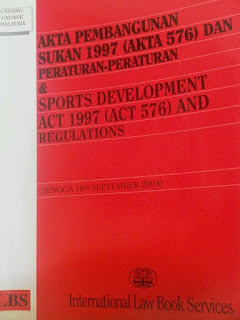 The first paragraph of the act reads;

An Act to promote and facilitate the development and administration of sports in Malaysia and to provide for matters incidental thereto.

The next question would be, what has been achieved from this act?

Having read all Acts related to sports in the country many times in the past, I decided to flip through the Sports Development Act 1997 again last night.

I was prompted to revisit the act after reading a Bernama report that said the Olympic Council of Malaysia will form a special committee to study and give their input on a proposal to amend the act.

Here are some of the sections that could be looked at;

19. Grounds for refusal of registration
(1) The Commissioner may refuse to issue a certificate of registration to a sports body unless -
(a) he is satisfied that such sports body is a non-political organization for the promotion and development  of a sport in Malaysia; or

You may ask why just 'he' and why no she? Or you could question shouldn't it be organisation (British English) instead of organization (American spelling)?

But more importantly is the word non-political.

23. Internal procedure for resolution of dispute.
Every sports body shall resolve any dispute arising amongst its members or with its committee or governing body in accordance with the internal procedures prescribed in the regulations.

How many sports body or officials within sports bodies have resolved their disputes internally instead of sending legal notices?

33. Approval for hosting of international competition.
No person shall bid to host any international sports competition or event in Malaysia without the prior approval in writing of the Minister whose decision thereon shall be final.

36. Company to apply for licence to operate.
(1) A company shall not involve itself in any sporting activity or in any activity related to sports, as may be prescribed by the Minister in the regulations, unless it is licensed to do so by the Commissioner.

These sections should be enforced strictly and the onus lies with the Sports Commissioner's Office to ensure the concerned parties abide by the law. Remember last year's Energizer Night Run?

Read 'Sports chief in the dark', 'Let's be serious', "...you betrayed honest runners" and 'Shabery says...'

35. Minister's approval required for "Sukan Malaysia".
A person shall not, without the prior approval in writing of the Minister, organize or conduct any competition or event involving any sport by using the name "Sukan Malaysia" or any derivative or variation of such name.

Perhaps this should be extended to other "national identities" as well to avoid confusion and possible legal actions in the future.

39. General offence.
Any person guilty of an offence under this Act for which no penalty is expressly provided shall on conviction be liable to a fine not exceeding five thousand ringgit or to imprisonment for a term not exceeding six months or both.

Firstly, has this even been enforced? And secondly, a higher in fine would be more appropriate.

The definitions of recreational and traditional games need to be outlined. Unlike street basketball, futsal is a sport of its own identity and it would be unfair to treat it as a 'recreational' sport.

The Act remains vague and perhaps the powers that be could look into defining sections so that they are better explained. I remember having a chat with a Sports Commissioner in the past and he said that the Act is to serve as a warning to those within the fraternity and it is never the intention to penalise anyone.

However, times have changed - more so after the Sports Ministry introduced the Sports Industry campaign. The sports industry in the country is huge and the players must be bound by regulations besides steering within other legal boundaries.

It is high time for every party to take the Act seriously.