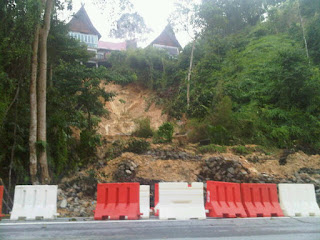 It is also baffling to how landslide issues are - most of time - taken for granted.

Together with a fellow editor, I drove to the landslide incident at 6.50am yesterday and the policemen manning the area were kind enough to escort the both of us to the landslide area which has been cordoned off about 1km in both directions.

I managed to take several snapshots while the other editor video-recorded the scene through a Blackberry mobile phone and the recording was even used for Astro Awani's tv news bulletin.

The spot is under the jurisdiction of MPKj due to its geographical location and not the Ampang Jaya Municipal Council as widely presumed. Also, the effected area is Jalan Hulu Langat which leads to Jalan Taman Putra, Ampang near the Taman Seri Bayu housing area.

Why did the landslide incident jog memories? Here is a list of landslides in the Klang Valley. More articles on landslides as seen here and here. Also read a brief thesis by several Universiti Sabah Malaysia students on soil erosion here.
1993, the Highland Towers in Taman Hillview, Ulu Klang collapsed due to a massive landslide and claimed 48 lives

I remember the landslide incident on Nov 20, 2002 that destroyed the bungalow of Affin Bank Bhd chairman Gen (Rtd) Ismail Omar which left the whole family and two Indonesian maids dead. The area was hardly 500m away from the tragic Highland Towers incident that claimed 48 lives (in 1993).

I visited that site a few months later to study the soil and the landscape of the area as it was part of my thesis during my years studying civil engineering.

While digging through the soil and taking samples, I remember seeing strands of hair and other debris. I also contacted a friend who was attached with IKRAM and she directed me to a leading geosythetics company Polyfelt (now known as Royal Ten Cate). 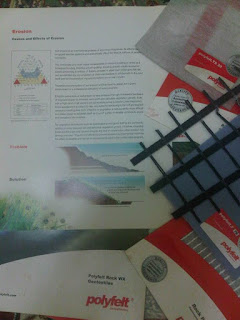 The company provided me with information, samples of mats (pics) and proposed methods to address soil erosion.

I remember presenting in front of a panel of lecturers that such mats be used by local councils and developers when addressing slopes and soil erosion.

And I still remember clearly that one of the lecturer said I sounded like a salesman for Polyfelt. That sarcastic comment did little to affect my overall marks which I was proud of.

However, we often see exposed soil being covered by the blue plastic sheet which is only a temporary solution especially during the rainy season but is often left at potential landslide areas for months and even years.

10 years on - minus the usage of such mats - we still see landslides occurring.

I also remember spending time at the Ampang Lookout Point just to enjoy the fresh air and KL skyline at night.

Most importantly, MPKj was right to shut down Ampang Lookout Point. I remember many lambasted the council, with some claiming a "sour deal" led to the closure.

It is now evident that soil erosion was a problem.

What if Ampang Lookout Point continued to operate, it rained a little heavier and the whole structure - with families, young couples and tourists dining, laughing and enjoying the cool weather - came tumbling down on Thursday evening?

We would certainly be having a different conversation.