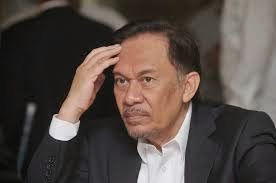 Palace officials are unimpressed with Datuk Seri Anwar Ibrahim after he had written a letter seeking a meeting between his wife Datuk Seri Dr Wan Azizah Wan Ismail and the Sultan of Selangor, Sultan Sharafuddin Idris Shah.

“It is as though someone ill-advised him (Anwar) on the purpose. We seriously cannot believe he made that mistake. Protokol pun tak faham (He doesn’t even understand protocol),” the source close to the palace said.

“With regards to the letter, it’s as though Anwar doesn’t want to meet Tuanku but must show he is trying to do so. But he knows he can’t be meeting Tuanku by making such a rookie mistake.”

The Selangor palace received the letter on Sunday.

Sultan Sharafuddin’s private secretary, Datuk Mohamad Munir Bani, said in a press statement yesterday the sultan had declined to meet Anwar because he had already been briefed of the developments in PKR by Khalid.

He said the sultan regarded Khalid’s sacking as a PKR internal matter which did not affect his position as a member of the state assembly and as Mentri Besar.

Khalid met Sultan Sharafuddin on Monday to explain that despite being sacked by PKR, he still maintained the confidence of the majority of the state legislative assembly members.

“His Royal Highness was satisfied with my explanation and consented to me continuing to hold the post of Selangor Mentri Besar until further developments take place,” he said.
Anwar Ibrahim khalid ibrahim PKR Selangor sultan sharafuddin idris shah