August 31, 2014
As published in Malay Mail on Saturday. Article is by Frankie D' Cruz. 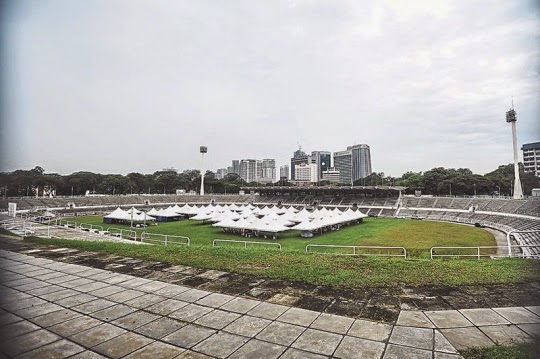 Merdeka Stadium looks about 80. But she is not, she is 57. That is not old age, but it is not young either.

She deserves to have pride of place in the altar of celebrations as the nation revels in 57 years of independence. But she is all alone, almost in embarrassing anonymity.

That would explain why she looks aged and forgotten while Malaysia, her same age, looks the very opposite — riveting.

My point? The absence of the very spot  — where Tunku Abdul Rahman stood on the morning Aug 31, 1957 to declare Malaya’s independence from the British — in the towering significance of Merdeka Day cheeriness.

The joy, while muted by the twin airline disasters of MH370 and MH17, is further dampened by the stadium being a victim of historical amnesia.

You must agree with me that in the current struggle for national recovery, the stadium which in recent decades fell into disuse, would have been a beneficial venue for inspiration.

Historical disrespect? Consider: Seven years ago, when Malaysia celebrated 50 years of independence, I helmed a team that produced a 13-episode television documentary ‘Sports — a nation builder’ for the government.
The opening chapter on Merdeka Stadium began with three questions: Have you heard of Merdeka Stadium? Where is Merdeka Stadium? Have you been to Merdeka Stadium?

Students, those in their 20s, 30s, 40s and 50s, gave disheartening responses: that they had never been there; vaguely remembered reading about the stadium in history books; one man said he had been to the stadium only once on his first date with his wife to the fish head curry restaurant.

The five were among some 50 Malaysians interviewed, majority of whom had completely forgotten Malaysia’s Independence icon.

This week Malay Mail carried out a similar exercise involving the same age groups, and it was the same heartbreaking story.

The blistering honesty about Merdeka Stadium, once the conscience that fed the Malaysian dream, is that she has been airbrushed from Malaysia’s annals.

Once, the soul and character of Malaysia and her sporting feats. Once, the scene of an outpouring of unbridled joy during the declaration of “Merdeka”.

Once, where people of all ages and races bonded in local and international sporting, youth, culture and religious events.

Once, where Malaysians threw off the straitjacket of pessimism and attained a cloak of adventure.

If Merdeka Stadium had tremendous depth, diversity and appeal, why is she being sidelined as a venue for Malaysians to gain some pace and quintessentially Malaysian gusto?

When tens of thousands, their spirits soaring, filled the stadium to hear Tunku — our first Prime Minister — proclaim “Merdeka”, it was the start of Merdeka Stadium’s national duty to help build more pride, self-esteem and a sense of belonging among Malaysians.

That she did — in style. Merdeka Stadium promoted the virtues of sports and family units by bringing the rakyat together through activities, achievement and integration.

She became an instrument of understanding among people. She became a formidable vehicle for the education about the world at large. She instilled in children and young people values such as respect and tolerance.

It enabled a fledgling nation like ours to share the international sporting stage with bigger and more developed nations in a way that few institutions could.

Merdeka Stadium was the brainchild of Tunku, who had in his speech at the opening ceremony, said: “I have great hope that the stadium will be the meeting place for sportsmen throughout the world. Through sports, we hope to promote peace and happiness and goodwill in this world.”

A national stadium had already been the dream of the sports-loving Tunku as early as 1951, though the idea was not mooted until 1953.

When Tunku laid the foundation stone in 1957, at the site of Coronation Park (earlier known as People’s Park) where every sports-loving person gathered, he said:

“Every sportsman has been clamouring for it and the demand was so great that I plucked up sufficient courage to pose a question at the meeting of the Federal Legislative Council on March 18, 1953. My question was greeted with derisive laughter from all over the House.”

His detractors, mainly British administrators, believed that it was a waste of public funds. They were to be proven sorely wrong later.

Tunku’s critics never foresaw the powerful brand that Merdeka Stadium was to become.

Merdeka Stadium continued that people’s tradition and almost everything involving the rakyat was held there.

She stirred the nation, motivated and unified the people. She was the model to effect desirable change, the best love story on the land — a romance between the nation and a bastion of a nation’s accomplishments.

It was where the stirring sight of the best kind of Malaysian hero — the unheralded kind — whose unpredictable skills emerged.

It was where the first Malay Mail Big Walk, or warmly known as the Biggie on Feb 21, 1960 involving 2,864 participants was flagged off by Tunku.

If Sri Shanmugnathan and his boys shimmered by fin

If the Malay Mail survey is anything to go by, many Malaysians, most of whom were born post-Merdeka, especially those who had not grown up in Kuala Lumpur or who were totally disinterested in sports, are totally unconcerned about the stadium.

The authorities are not helping. Just two  events — one showcasing the history of various government departments and the other screening black and white movies from Malaysia’s past — are being held at the national institution to celebrate independence this year. Sad.­

If Merdeka Stadium was once the centrepiece of unifying force, one wonders why the authorities now don’t see its obvious value to the nation.

Granted, Malaysia needed the colossal National Sports Complex in Bukit Jalil, but why haven’t we been able to imprint Merdeka Stadium in the minds of Malaysians as the site of Merdeka, Merdeka, Merdeka?
ishing fourth at the Hockey World Cup — our best ever placing  in the tournament —  it was also in 1975,  that the world spotlight shone on Merdeka Stadium when boxing great Muhammad Ali fought Joe Bugner. It was where Michael Jackson performed.
frankie d cruz Merdeka Sports stadium merdeka