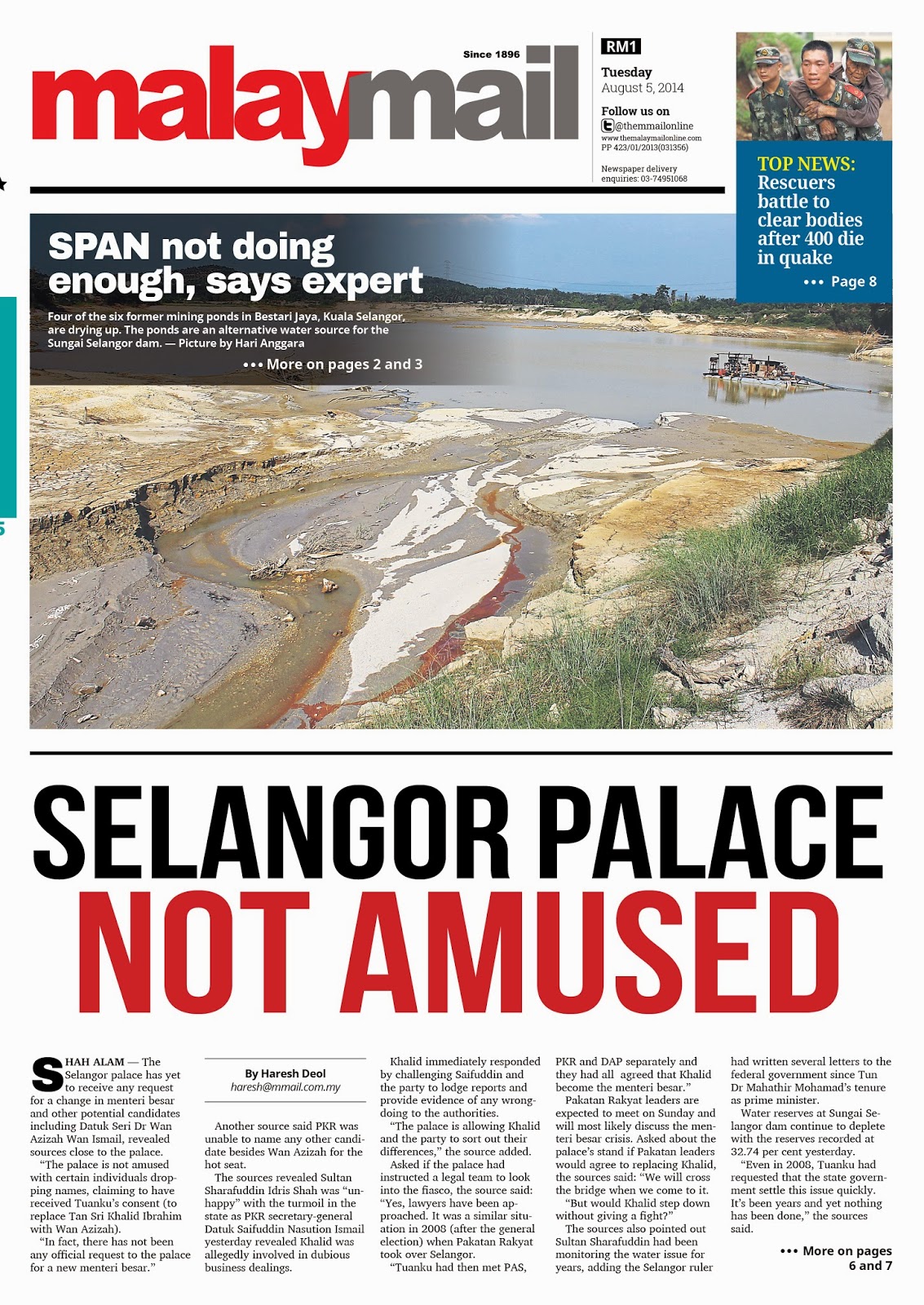 SHAH ALAM — The Selangor palace has yet to receive any request for a change in menteri besar and other potential candidates including Datuk Seri Dr Wan Azizah Wan Ismail, revealed sources close to the palace.
“The palace is not amused with certain individuals dropping names, claiming to have received Tuanku’s consent (to replace Tan Sri Khalid Ibrahim with Wan Azizah).
“In fact, there has not been any official request to the palace for a new menteri besar.”
Another source said PKR was unable to name any other candidate besides Wan Azizah for the hot seat.
The sources revealed Sultan Sharafuddin Idris Shah was “unhappy” with the turmoil in the state as PKR secretary-general Datuk Saifuddin Nasution Ismail yesterday revealed Khalid was allegedly involved in dubious   business dealings.
Khalid immediately responded by challenging Saifuddin and the party to lodge reports and provide evidence of any wrongdoing to the authorities.
“The palace is allowing Khalid and the party to sort out their differences,” the source added.
Asked if the palace had instructed a legal team to look into the fiasco, the source said: “Yes, lawyers have been approached. It was a similar situation in 2008 (after the general election) when Pakatan Rakyat took over Selangor.
“Tuanku had then met PAS, PKR and DAP separately and they had all  agreed that Khalid become the menteri besar.”
Pakatan Rakyat leaders are expected to meet on Sunday and will most likely discuss the menteri besar crisis. Asked about the palace’s stand if Pakatan leaders would agree to replacing Khalid, the sources said: “We will cross the bridge when we come to it.
“But would Khalid step down without giving a fight?”
The sources also pointed out Sultan Sharafuddin had been monitoring the water issue for years, adding the Selangor ruler had written several letters to the federal government since Tun Dr Mahathir Mohamad’s tenure as prime minister.
Water reserves at Sungai Selangor dam continue to deplete with the reserves recorded at 32.74 per cent yesterday.
“Even in 2008, Tuanku had requested that the state government settle this issue quickly. It’s been years and yet nothing has been done,” the sources said.
datuk seri wan azizah wan ismail Malay Mail Menteri Besar PKR sultan selangor sultan sharafuddin idris shah Tan Sri Abdul Khalid Ibrahim