Boys and girls, it’s time to get fit 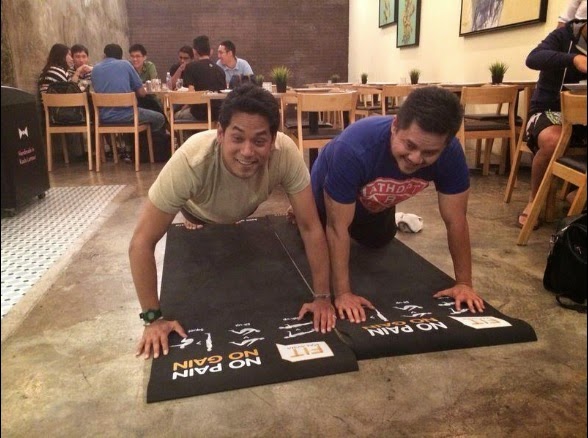 LET’S not kid ourselves. Doing 20 push-ups before eating chicken briyani is not going to turn us into hunks or lower our cholesterol.
But this is beyond push-ups or crunches for a free meal or to post such antics online to get the attention of fellow social media users.
Here is an initiative by the Youth and Sports Ministry to get people to sweat it out and maintain a healthy lifestyle.
It has been a while since the ministry had embarked on such an aggressive campaign on social media to get people active. Led by its minister Khairy Jamaluddin, the hashtag #FitMalaysia and informative tips by @FitMalaysians on Twitter have certainly caught the attention of many.
Khairy, had for several weeks, encouraged the masses to perform exercise routines. There is also a promotion where if one could do 20 push-ups at a restaurant in Publika, he or she would get either a chicken briyani or a tandoori wrap.
This is not just about the ministry’s initiative or Khairy. Such efforts indirectly highlight a fact that many choose to ignore — the worrying state of health of Malaysians today.
The number of Malaysians suffering from non-communicable diseases (NCD) is alarming. From a population of slightly over 30 million, 6.2 million Malaysians have high cholesterol, 5.2 million suffer from hypertension, 2.6 million people are diabetic while 2.5 million are obese.
The “urbanites”, often caught in the rat race, tend to use work as an excuse for not having time to pump their hearts. The lack of discipline in one’s lifestyle is often to be blamed for the end result could prove fatal.
But an exercise routine, if done diligently, has so much to offer.
By having ample space to run and a working environment that provides employees time to exercise, it would promote a healthy workforce. This would then see a reduction in clinic and hospital bills, saving time and manpower.
Conducting physical activities with family members and friends can improve relations and enhance social interaction among communities.
There is a need for more parties to be involved in such a programme. As rightly stated in the National Strategic Plan for NCD issued by the Health Ministry in 2010, a myriad of stakeholders have to be actively involved in creating policies and legislations to create a health promoting build environment and also in implement programmes to prevent and control NCD in Malaysia.
This includes active participation from various ministries, namely education, health, and women, family and community development. There should be an ecosystem where all parties play a role to ensure a healthy nation. This would also promote the sports industry, an avenue which remains to be sorely overlooked by many.
Sadly, we often see such noble efforts downplayed in the name of ego. Such policies are immediately forgotten once a new minister sets in. New policies are introduced once a new person takes office, as ministers are eager to leave a legacy during their short stint. Instead, their work is often remembered for the wrong reasons.
There were many masterplans hyped in the past, including the Rakan Muda campaign. There were efforts to get corporate bodies to sponsor national sports associations and at one time, the ministry went big on extreme sports, hoping to win the hearts of the “younger generation”. All these initiatives died a natural death.
The same is evident in other ministries and government agencies as well.
The time has come for such policies to be adopted as a long-term national agenda and evolve along the way. The Japanese, through their FA in 1992, embarked on a 100-year programme for football. This explains their continuous dominance in the region. Imagine what we could have achieved if similar goals were set — but with little interference or by not derailing from the initial objective.
It does not matter if you love Khairy or simply despise him. What matters the most is the fact that we have an initiative to promote a healthy lifestyle among the masses.
Go run, walk, cycle, jog, swim or jump. And I’m sure the people at Fitness Innovation Malaysia (also known as FIT Malaysia), a standard fitness training, learning and certification centre based at Damansara Perdana, would not mind #FitMalaysia going viral.
It is all about our well-being, to inject the importance of wellness among our younger generation and to promote a productive nation.
So boys and girls, it’s time for us to get fit!
@FitMalaysians Fit Malaysia Khairy Jamaluddin Publika push-ups Youth and Sports Ministry