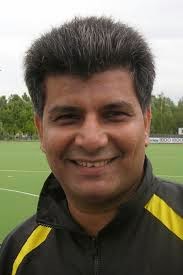 Former national skipper Sarjit Singh (pic) could assume his previous role as national coach as efforts to rid K. Dharmaraj continues.
Sarjit was the national coach from January 2007 to December 2008. Malaysian Hockey Confederation (MHC) vice president Manjit Majid Abdullah was quoted as saying Dharmaraj “should be sacked” as he was not good enough to lead the team ahead of the Asian Games in Incheon, South Korea next month.
The national team is also in a disarray as the team management, MHC and the National Sports Council (NSC) do not see eye-to-eye. The MHC World Cup review panel submits its report to the body’s president Tengku Abdullah Shah today, and it could well decide Dharmaraj’s fate.
Datuk R. Yogesweran heads the panel which also comprises National Sports Institute CEO Datuk Dr Ramlan Aziz, NSC director general Datuk Seri Zolkples Embong, Datuk Poon Fook Loke, Datuk Ow Soon Kooi, R. Ramakrishnan, M.P. Haridass and NSC athletes department director Ariffin Ghani and MHC senior vice president Datuk Nur Azmi Ahmad.
The under-fire coach was lambasted for the team’s shocking 4-2 loss to Trinidad and Tobago at the recently concluded  Commnonwealth Games, which came on top of Malaysia’s failure to win a single game at the World Cup in The Hague, Holland.
Dharmaraj, however, was not impressed with the move and said: “A lot of people in MHC have been deter- mined to get me out since the days when I was coaching the Under-16 team.
“I have survived and hope to continue to survive. My target ever since assum- ing the role as chief coach has been to win the gold medal at the Asian Games.
“Yes, we had no business losing to Trinidad, but in the end, we finished seventh with a team with many new faces.
“People forget we beat Canada’s first team, the same team who beat our first team earlier this year.”
Who runs Malaysian hockey?
Meanwhile, there are questions over the national team’s training and friendly matches in Holland next week with three parties — Ariffin, team manager George Koshy and Azmi, who is also national team management committee chairman — all having different things to say when asked about the three- week stint which was supposed to start next Monday.
While George and Arrifin insisted the trip would take off but delayed by a couple of days, Azmi said it was in NSC’s hands. “Zolkples is away on holiday so we are waiting for  confirmation from him,” said Azmi.
When told about Azmi’s comments, Arrifin retorted: “We don’t have to play games. The trip was confirmed but details were yet to be finalised.
“We were in touch with George today (yesterday) and was told the team would leave after a post-mortem with Sports Minister Khairy Jamaluddin next week (Tuesday).
“The team could even leave the fol- lowing day. This plan has been in place since the World Cup and there are no changes but for the dates.”
But George gave another reason for the delay.
“We will leave sometime next week. The team just came back on Wednesday and we decided it was not wise to depart so soon,” said George.
“The boys who went for the Com- monwealth Games need a break. We’ll name a squad of 20-25 players before departing for Holland and the Asian Games selection pool will be among those players.”