Bet your last Dollah on Malaysia

December 12, 2014
As published in Mailsport today 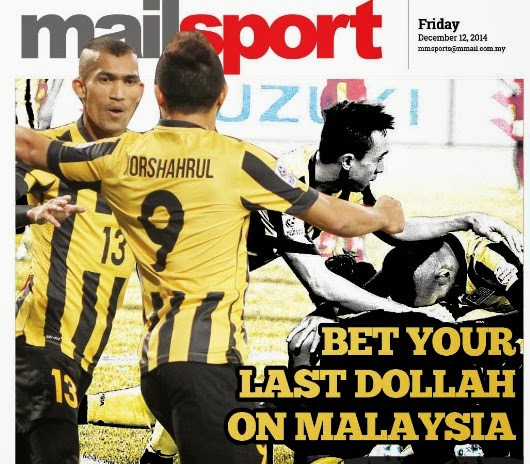 PETALING  JAYA — Call it tactical prowess or luck but Dollah Salleh has a knack of delivering when the odds are against him.
Not many had given Malaysia a shot of reaching the AFF Cup final but Harimau Malaya stunned Vietnam 4-2 in the second leg semifinal in Hanoi last night to set up a mouth-watering two-legged clash against Thailand next week.
Vietnam had won 2-1 at the Shah Alam Stadium on Sunday but Dollah’s five changes to the starting line-up ensured Malaysia prevailed 5-4 on aggregate.
Malaysia cancelled Vietnam’s away goals advantage after 15 minutes.
Safiq Rahim converted a penalty in the third minute, as he cemented his position at the top of the scoring charts with four goals — three from the spot.
Norshahrul Idlan Talaha made the most of a long pass in the 15th minute but Vietnam pulled one back through skipper Le Cong Vinh just seven minutes later.
But it wasn’t long before Malaysia increased their lead again when Dinh Tien Thanh deflected the ball past his goalkeeper Tran Nguyen Manh in the 28th minute.
Skipper Shukor Adan made it 4-1 as the half drew to a close when he sneaked in at the far post to head in a corner.
The home side looked more composed in the second half but Malaysia held firm until the 78th minute when Cong Vinh scored again.
It was a nervy 12 minutes from then on but Vietnam could not get their shots on target despite dominating proceedings.