Have we lost our humanity? 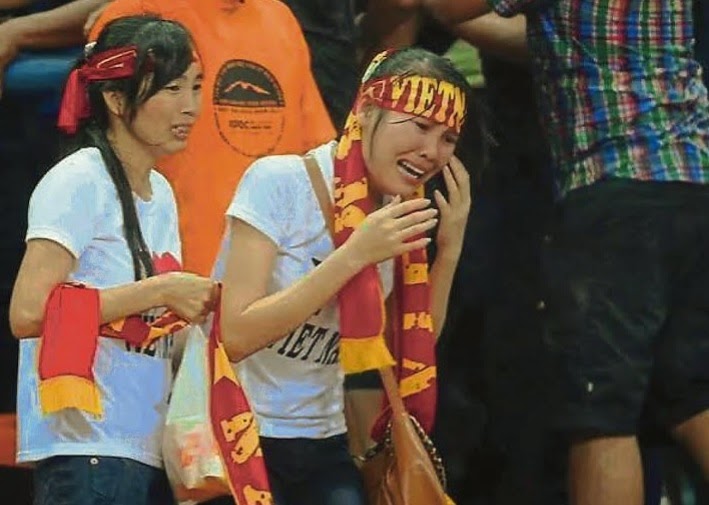 That is not the picture one would expect after Áo Đỏ (the nickname of Vietnam’s national football team which means Red Jersey) edged Harimau Malaya 2-1 in the AFF Cup first leg semi final at Shah Alam Stadium on Sunday.

Kicks and punches flew soon as the final whistle was blown. It was an ugly sight that marred the beautiful game. Hooligans tainted the sport, as their stupidity went against fair play, respect and sportsmanship.

Apologies, and plenty of it, emerged as sympathisers pacified Vietnamese supporters hoping our foreign guests do not paint a dark image on Malaysian football supporters. As the Malay saying goes, kerana nila setitik, rosak susu sebelanga (One bad apple spoils the whole barrel).

We can take issue in so many ways. For starters, the FA of Malaysia’s anti-hooliganism campaign launched in February had failed big time.

To put it bluntly, it was just mere lip-service, an eye-wash.

Smoke bombs and flares continued to light up the stands during and after football matches. This was also evident at Sunday’s match. This despite repeated warnings from police and the national body.
Once again, it was mere talk. Period.

But beyond the authorities, one wonders what has happened to humanity.

We carry smartphones and other high-tech equipment but find it right to clobber another human being over a football match. Really?

We saw an image of at least one Vietnam supporter stained in blood, believed to have suffered a cut on his head. There were also pictures of two Vietnamese girls crying, fearing for their safety. One would not expect that from a sporting event.

In Penang, foreigners are found dead almost every week, some with their throats slit while others with their heads and limbs dismembered. There are strong indications of it being communal clashes, based on the series of reports in Malay Mail. It’s brutal.

Certain quarters are getting peeved over MIC having to undergo a re-election and are demanding for president Datuk Seri G. Palanivel to step down. The greed of fighting for positions in the name of upholding the interest of Indians continues. Yet, the community wonders what exactly has MIC done for them — a question which has also been posed to other political parties. Have we forgotten Maika Holdings, among the many other things?

The lack of logical thought in our daily lives is becoming more apparent. Common sense flushed down the toilet.

And we now live in a world where doing the right thing has now turned “cool” and often glorified. When leaders turun padang (attend the event) we are supposed to celebrate. When a cop nabs a thief, it’s supposed to be plastered on the headlines.

It is like promising your son a Ferrari if he scores straight As. The motivation is not obtaining an education but hoping to get a set of wheels that will turn him into a chick magnet when he enters college. How about that, eh? (sic)

Holding open the elevator door for an elderly lady is now a big deal. If possible, many will want to quickly close the door or pretend not to see the person trying to get in.

Call for moderation and the need to respect individuals, despite creed, colour or background, and one is dubbed a “hero”.

Then we have the much sought after debate about religion, where the holier-than-thou pretend they are God’s gift to mankind. And when they sense the discussion is not to their preference, they will throw in the ‘my God is better than your God’ card.

Let’s not tax our brains with such complexity.

When was the last time we smiled at a total stranger serving us food and said “thank you”? Simple actions and words which are rarely mentioned today.

We lack the respect seen by our elders who grew up in the 50s but are somehow still stuck in that era — believing that the masses are yes-men and adopt the herd mentality.

What happened to enjoying life and spending quality conversations with your old folks and friends instead of stressing up over silly matters or comments made by individuals who claim to be leaders.
We can take issue with the whole world. But it starts with us.

If each and every one of us played our part and did the right thing, we will make a difference and not allow foolish characters to disrupt our lives — may it be at the stands or during a political rally.

Have we lost our humanity? I hope not.