HARESH SAYS: Sports have no place for political ideologies

PERHAPS the biggest mistake politicians tend to make is trying to score points through sports.
Sadly in Malaysia, sports and politics have always enjoyed an “incestuous” relationship.

Presidents and top officials governing sporting associations mainly comprise of politicians and in some cases even menteri besar.

The justification is that these leaders will be able to secure funds for the associations. A lame excuse to camouflage the lack of thought or work to lure in sponsors. The money pumped into these associations are from state government’s coffers — taxpayers’ money in short.

Malaysian politicians have been affiliated with sports for a long time. Former prime ministers Tunku Abdul Rahman and Tun Abdul Razak led the Football Association of Malaysia (FAM) during their eras.

Datuk Seri Shahidan Kassim was infamously known for being president of several sports associations including Perlis FA, Amateur Swimming Union of Malaysia, Kabaddi Association of Malaysia and Malaysian Amateur Athletics Union (now the Malaysia Athletics Federation). He was also part of FAM during his tenure as Perlis menteri besar.

A longtime sports official once said: “Politicians love sports as it is the best way to connect to the masses. Sport enjoys a wide audience, wider than political parties can ever imagine.”

Thus it comes to no surprise as to why certain quarters find it appropriate to hijack the AFF Cup second leg final between Malaysia and Thailand at the National Stadium in Bukit Jalil last Saturday.
PKR Youth chief Nik Nazmi Nik Ahmad made public his plan to distribute flyers demanding petrol price be lowered to RM1.90. He mentioned it on Instagram.

He instead received flak, big time, from football fans and critics.

The public bashing must have been a humiliating experience — so embarrassing that apparently a statement was issued by the Youth wing which, after paragraphs of Barisan Nasional (BN) bashing read: “We take heed that plans to distribute the flyers at Bukit Jalil Stadium received various reactions. To avoid any provocation or untoward incident, we have postponed our intention. But we will still head to the stadium to support Harimau Malaya.”

Wow, and after their failed effort to shamelessly jump on the football bandwagon, the party was there to support the national team. How convenient ... as if nothing happened! 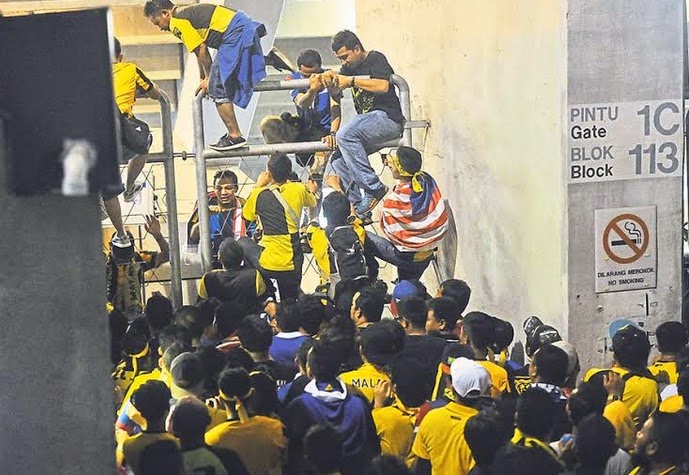 Want to score brownie points? Demand an explanation over the poor condition of the field (despite the millions of ringgit spent on it since 1997). Why were fans jumping over the steel gates and what if a fire broke out, who would be responsible for a possible stampede leading to the deaths of the young and old at the stands?

Politicians from both sides of the divide need to understand that fans are able to differentiate between sport and politics. Ask Umno-man Tan Sri Annuar Musa and he will tell you that despite running a successful state team, Kelantan are still in the hands of PAS.

The Islamic party even took opportunity of Kelantan’s excellent outing in the M-League, enticing voters by promising them a bigger football stadium in the state as an alternative to the 22,000-capacity Sultan Muhammad IV Stadium in Kota Baru prior to last year’s general election.

It is unclear if such a promise translated into votes. It also remains unseen if the state leadership will keep to its promise to construct a larger stadium for the Red Warriors.

National shuttlers Koo Kien Keat and Tan Boon Heong were paraded by BN members in Ijok after winning the All-England doubles championship in 2007, days before the by-election there. It did not go down well with badminton fans who called it “a political gimmick”.

Fans are tired of politicians running the show. Even Youth and Sports ministers learnt it the hard way when they tried to inject their party ideologies into sports only to fail. Khairy Jamaluddin knows this better, having received training during his days with the now defunct MyTeam and as a one-time FAM deputy president.

Sports should be pure from all forms of politics — internally and externally. After music, it is the only element able to unite people, to give hope and a feel-good factor. Just tweet a subject on Malaysian football and it will get more traction than some silly remark by a politician.

The biggest loser on Saturday was not Dollah Salleh and Co but Nik Nazmi and PKR that failed to understand the definition of sports, team spirit, respect and fair play.
Shame on you!

It has been an interesting journey for Ahmad Shapawi Ismail.

Once groomed to be the National Sports Council (NSC) director-general, Shapawi was seen as a “threat” by some of his colleagues, who eventually led him out of his office. He was appointed the National Sports Institute (NSI) chief executive officer before being made Sports Commissioner — two roles which do not suit his portfolio.

But he is enjoying the last laugh. Shapawi was named the new NSC director-general last Thursday  , replacing Datuk Seri Zolkples Embong in the hot seat.

You must understand the true objective, function and purpose of NSC. Do read the NSC Act 1971.
Your job is not all about travelling abroad for competitions but to plan and come up with fresh ideas to improve Malaysian sports.

Take into account the welfare of athletes for they are your greatest asset investment.

Just because you are the funding arm of the ministry, it does not give you the right to dictate. Work with the stakeholders especially NSI, national sports associations and the Olympic Council of Malaysia.

If you stay true to the principles of sports — fair play, respect and sportsmanship —you will never go wrong.

Accept criticism just as how you would accept admiration.