December 07, 2014
As published in Mailsport today 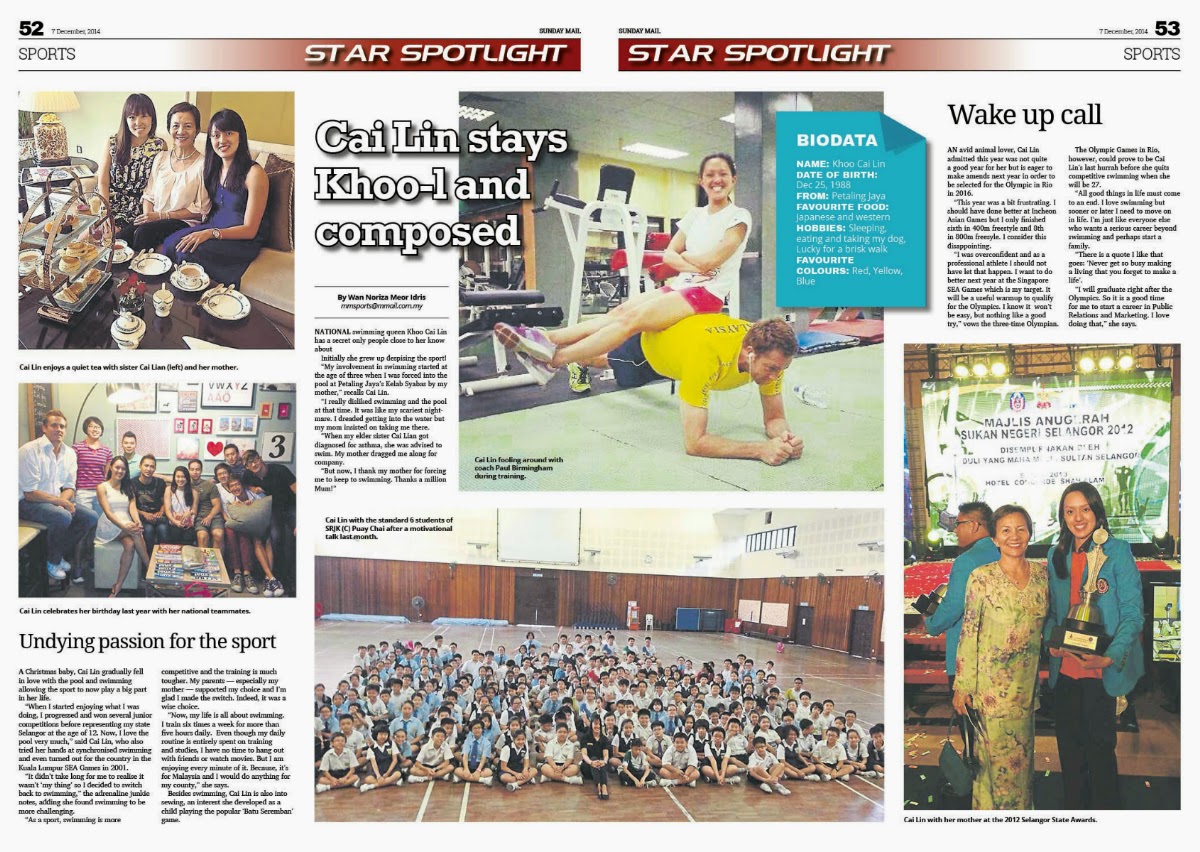 NATIONAL swimming queen Khoo Cai Lin has a secret only people close to her know about
Initially she grew up despising the sport!
"My involvement in swimming started at the age of three when I was forced into the pool at Petaling Jaya’s Kelab Syabas by my mother,” recalls Cai Lin.
“I really disliked swimming and the pool at that time. It was like my scariest nightmare. I dreaded getting into the water but my mom insisted on taking me there.
"When my elder sister Cai Lian got diagnosed for asthma, she was advised to swim. My mother dragged me along for company.
“But now, I thank my mother for forcing me to keep to swimming. Thanks a million Mum!"

Undying passion for the sport

A Christmas baby, Cai Lin gradually fell in love with the pool and swimming allowing the sport to now play a big part in her life.
"When I started enjoying what I was doing, I progressed and won several junior competitions before representing my state Selangor at the age of 12. Now, I love the pool very much,” said Cai Lin, who also tried her hands at synchronised swimming and even turned out for the country in the Kuala Lumpur SEA Games in 2001.
“It didn’t take long for me to realise it wasn’t ‘my thing’ so I decided to switch back to swimming,” the adrenaline junkie notes, adding she found swimming to be more challenging.
“As a sport, swimming is more competitive and the training is much tougher. My parents - especially my mother - supported my choice and I’m glad I made the switch. Indeed, it was a wise choice.
"Now, my life is all about swimming. I train six days a week, more than five hours daily. Even though my daily routine is entirely spent on training and studies, I have no time to hang out with friends or watch movies. But I am enjoying every minute of it. Because, it's for Malaysia and I would do anything for my county," she says.

An avid animal lover, Cai Lin admitted this year was not quite a good year for her but is eager to make amends next year in order to be selected for the Olympic in Rio in 2016.
"This year was a bit frustrating. I should have done better at Incheon Asian Games but I only finished sixth in 400m freestyle and 8th in 800m freesyle. I consider this disappointing.
"I was overconfident and as a professional athlete I should not have let that happen. I want to do better next year at the Singapore SEA Games which is my target. It will be a useful warmup to qualify for the Olympics. I know it  won't be easy, but nothing like a good try," vows the three-time Olympian.
The Olympic Games in Rio, however, could prove to be Cai Lin’s last hurrah before she quits competitive swimming when she will be 27.
"All good things in life must come to an end. I love swimming but sooner or later I need to move on in life. I’m just like everyone else who wants a serious career beyond swimming and perhaps start a family.
"There is a quote I like that goes: ‘Never get so busy making a living that you forget to make a life’.
“I will like to start a career in Public Relations and marketing. I love doing that," she says.