BEING FRANK: Things can only get bitter

March 21, 2015
Being Frank by Frankie D'Cruz, as published in Malay Mail today. 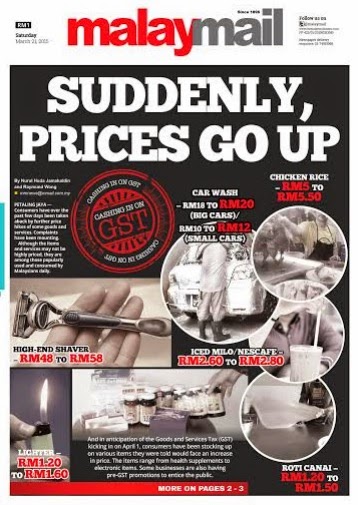 AIMING for goal, the Land Public Transport Commission has hit the crossbar. The sudden and sharp increase in public transport fares is so out of touch, it’s untrue about the impact of government austerity measures on consumers.

In probably the most depressing story of the week, the commission (SPAD) unleashed a triple whammy on the same day by sanctioning steep increases in budget taxi, express bus and commuter train fares.

One thing’s for sure: The people get overrun and this sort of price hike frenzy will help no one.

In what other society would such wide scale failure be tolerated? Failure - because Malaysian policy makers seem to have lost touch with the man on the street.

Consider the whole issue that is becoming increasingly radioactive: The fare increases come before and after the implementation of the poorly explained goods and services tax (GST) on April 1.

It wasn’t sensible of SPAD to announce the sharp hikes at a time when consumers were grappling with the promise of the moon on a stick with regard to the confusing GST.

Clearly, the increases represent a regulatory failure by SPAD to review fares every two years at least with focus on small and manageable increments.

Why did they ignore a gradual increase to balance consumer and business interests? Why are they now scaring off the public instead of promoting public transport?

Why haven’t the various problems raised by taxi passengers, including haggling over the fare and unmetered rides been sternly addressed by SPAD? Could such deceit by the cabbies be due to the hopeless economic incentives provided by the existing fare structure?

Did they consider the timing and scale of fare increases would cause people to shy away from public transport and instead opt for alternative services such as Uber?

To be sure, this is a mission failure for SPAD that has shown no fairness as a regulatory agency and ignored those whom public transport providers depend on.

This is a gold-star grievance that entitles consumers to full victimhood status, given the expose by Malay Mail today on unscrupulous businesses cashing in on GST – a contemptuous behaviour that is too ingrained and cannot be altered overnight.

Dealing with such profiteering arrogance would be a daily aggravation for consumers without whom businesses are nothing.

I could fill this column every week with stories of vindictive taxi drivers, insane bus drivers, crippling price increases, rogue businesses and grasping bureaucrats who appear to take a perverse pleasure in persecuting the very people they are paid to serve.

But then, we know it’s all about collective brain freeze. The harsh reality is plain: You and I are going down. The scope of the problem is overwhelming and diffused across a wide and densely crowded area.

When we dismiss their logic as idiotic, we are treated like children caught in a lie, grilled on every minor point of our argument and deemed hecklers.

Listen: You have sucked our financial oxygen out of the air and stuck a dagger into our hearts. I say: “Come, walk in our shoes.”