HARESH SAYS: For the sake of badminton, let's move forward 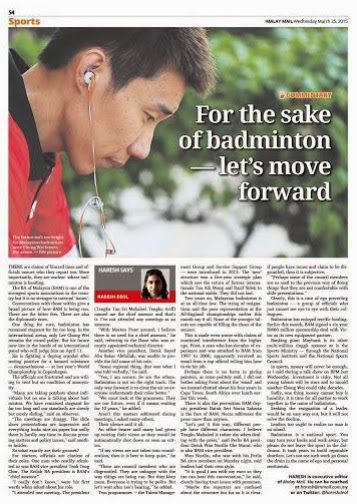 THERE are claims of blurred lines and officials unsure who they report too. More importantly, they are unclear where badminton is heading.

The BA of Malaysia (BAM) is one of the strongest sports associations in the country but it is no stranger to internal ‘issues’.

Conversations with those within give a broad picture of how BAM is being run. There are the bitter few. There are also the diplomatic ones.

One thing for sure, badminton has remained stagnant for far too long. In the international arena, only Lee Chong Wei remains the crowd puller. But his future now lies in the hands of an international panel who will judge him on April 11.

He is fighting a doping scandal after testing positive for a banned substance — dexamethasone — at last year’s World Championship in Copenhagen.

The officials are frustrated and are willing to vent but on condition of anonymity.

“Many are taking potshots about individuals but no one is talking about badminton. We have remained stagnant for far too long and our standards are slowly but surely sliding,” said an observer.

“The meetings are draggy. The slide show presentations are impressive and everything looks nice on paper but sadly there is hardly any time to discuss pressing matters and policy issues,” said another insider.

So what exactly are their grouses?

For starters, officials are clueless of their roles. One man who readily admitted so was BAM vice president Teoh Teng Chor. The Kedah BA president is BAM’s “chief assessor”.

“I really don’t know,” were his first words when asked about his role.

“I attended one meeting. The president (Tengku Tan Sri Mahaleel Tengku Ariff) named me the chief assessor and that’s it. I’ve not attended any meetings as an assessor.

“With Morten Frost around, I believe there is no need for a chief assessor,” he said, referring to the Dane who was recently appointed technical director.

Another vice president, Datuk Sayed Abu Bakar Abdullah, was unable to provide the full name of his role.

“Some regional thing, that was what I was told verbally,” he said.

“Yes, I am unsure. So are the others. Badminton is not on the right track. The only way forward is to clear the air so everyone understands their roles better.”

“We must look at the grassroots. They are our future, even if it means waiting for 10 years,” he added.

Aren’t this matters addressed during meetings, I asked many others.

Their silence said it all.

An office bearer said many had given up voicing their views as they would be automatically shot down or seen as critics.

“If my views are not taken into consideration, then it is best to keep quiet,” he said.

“There are council members who are disgruntled. They are unhappy with the way things are being run. But they keep mum. Everyone is trying to be polite. But let’s wait after Lee’s hearing,” he added.

Two programmes — the Talent Management Group and Service Support Group — were introduced in 2013. The ‘new’ structure was a five-year strategic plan which saw the return of former internationals Tan Aik Mong and Razif Sidek to the national stable. They did not last.

Two years on, Malaysian badminton is at an all-time low. The string of resignations and the poor representation at the All-England championships earlier this month say it all. None of the younger talents are capable of filling the shoes of the seniors.

This is made even worse with claims of continued interference from the higher ups. Frost, a man who has decades of experience and was attached to BAM from 1997 to 2000, apparently received an email from a top official telling him how to do his job.

Perhaps there is no harm in giving pointers, as some politely said. I did not bother asking Frost about the ‘email’ and we instead chatted about his four years in Cape Town, South Africa over lunch earlier this week.

There is also the perception BAM deputy president Datuk Seri Norza Zakaria is the face of BAM. Norza addresses the press more than anyone.

Wan Nordin, who was with his Perlis BA exco members on Monday night, said leaders had their own style.

“It is good I am with my exco so they too can hear this conversation,” he said, clearly having trust issues with pressmen.

“Maybe the reporters are confused about the structure but for us it is clear.

If people have issues and claim to be disgruntled, then it is subjective.

“Perhaps some of the council members are so used to the previous way of doing things that they are not comfortable with slide presentations.”

Clearly, this is a case of ego preceding badminton — a group of officials who just cannot see eye to eye with their colleagues.

Badminton has enjoyed terrific funding. Earlier this month, BAM signed a six-year RM60 million sponsorship deal with Victor as its new equipment partner.  Banking giant Maybank is its other multi-million ringgit sponsor as is the Sports Ministry — through the National Sports Institute and the National Sports Council.

In sports, money will never be enough, as I said during a talk show on BFM last Wednesday. Investment is risky. Not all young talents will be stars and to mould another Chong Wei could take decades.

Sadly, one thing money cannot buy is humility. It is time for all parties to work together in the name of badminton.

Seeking the resignation of a leader would be an easy way out, but it will not solve the decline.

Leaders too ought to realise no man is an island.

Badminton is a national sport. You may turn your backs and walk away, but please do not leave the sport in the doldrums. It took years to build reputable shuttlers. Let’s not see such work go down the drain in the name of ego and personal sentiments.

HARESH is executive editor of Malay Mail. He can be reached at haresh@mmail.com.my or on Twitter @hareshdeol
badminton Lee Chong Wei Malaysia