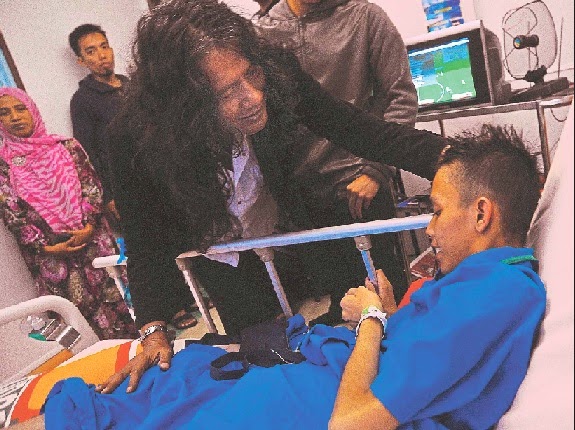 PETALING JAYA — It was a visit that struck all the right chords for cancer-stricken teenager Muhammad Syazwan Ashraf Mohd Sukri, 19, who sadly passed away hours after meeting his rock idol.

Syazwan had his last wish when he spent more than an hour with Man Kidal of Lefthanded at University Malaya Medical Centre before he died.

The member of the 80s rock band surprised Syazwan who had been his big fan since childhood.
The meet-up at Syazwan’s ward, while emotional, drew joy from the boy who was suffering from dermatofibrosarcoma protuberans, a rare form of soft tissue cancer.

Syazwan’s wish before he drew his final breath was to meet Man Kidal and, ultimately, the meeting could not have been more timely.

“I am touched but at the same time amazed he knows me. Through music, I have this fan,” said Man Kidal, 52.

“This is something I will remember all the days of my life.”

He visited Syazwan with his wife Norlaila Yusof and five-year-old grandson Adam Maulana. Norlaila, who is Man Kidal’s manager, could not hold back her tears during the visit.

Bed-ridden Syazwan was elated when Mat Kidal walked in.

They were brought together by businessman Kuldeep Singh, 52, a regular at the hospital where he visits at least 30 patients daily. That is how he met Syazwan.

“I was introduced to Syazwan by another cancer patient. I asked him if he had any particular wish and Syazwan said it was to meet Man Kidal.

“I made some phone calls and managed to get the guitarist to fulfil Syazwan’s dream,” he said.
Man Kidal was in Johor Baru for a gig but drove back yesterday to meet his young fan.

Syazwan’s mother Ruzita Abd Kadir, 45, was thrilled that Syazwan finally met his guitar idol.
“I can’t believe how happy he is. Through it all he is smiling and laughing,” said an emotional Ruzita.
“I’m so happy to meet my idol and hold his hand,” said Sayzwan.

Man Kidal had another surprise for Syazwan — an electric guitar which he had intended to present to him today.

However, it was not to be. Unfortunately and unbeknown to Man Kidal, Syazwan passed away at about 10.15pm before he could receive his gift.