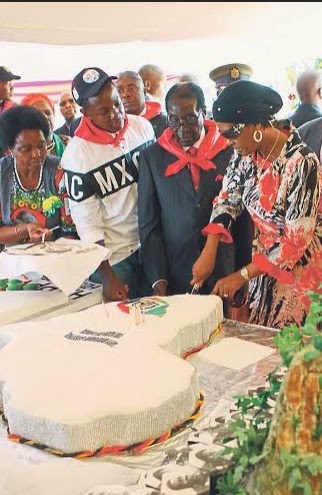 ROBERT Mugabe — hailed as a hero to some, labelled a “racist dictator” by others.

Having won the hearts of the locals,  mainly for fighting against the whites in the Rhodesian Bush War, Mugabe and his political party Zimbabwe African National Union — Patriotic Front secured a landslide victory in the 1980 elections as the nation gained independence.

Mugabe was named prime minister in 1980 before he became president in 1987 — a post he holds till today.

But it has been a challenging time for Africa’s oldest leader throughout his more than three decades in power. Zimbabwe’s economy has not been rosy. Six years ago, the African nation adopted the multi-currency monetary system, referred to as dollarisation. It was in response to the country’s chaotic economy, riddled with inflation, throughout the 2000s.

The World Bank recorded the most recent poverty headcount for Zimbabwe (in 2011) was 72.3 per cent, with 22.5 per cent living in extreme poverty.

“The depth and severity of rural poverty are much worse than those of urban poverty. The Vulnerability Assessment Survey indicated about 25 per cent of the total rural population needed food assistance in 2013 and the first quarter of 2014,” states the World Bank’s website.

Yet, Mugabe was treated to an estimated US$1 million (RM3.67 million) birthday bash last Saturday, as he turned 91 on Feb 21. His party drew plenty of criticism — from opposition leaders to animal lovers.

Some 20,000 guests attended as they feasted on a young elephant, two buffaloes, two sables and five impalas, among others, as the party was held at an exclusive lodge spa and golf course in Victoria Falls. He released 91 balloons and was presented with a 91kg cake.

His critics said this could be the beginning of Mugabe’s downfall, more humiliating than the time where he missed a step and toppled after speaking to supporters upon his return from Ethiopia early last month. But his loyal supporters remain unperturbed over the money spent, hailing him as “chief of chiefs”.

India, a nation where many continue to live in poverty, also witnessed a lavish birthday party recently. Mulayam Singh Yadav, had on Nov 21 last year, enjoyed a two-day celebration to mark his 75th birthday. The Samajwadi Party (SP) chief enjoyed a ride around Rampur town in a golden Victorian buggy brought from London and enjoyed a 75-foot high cake weighing 400kg.
Critics questioned the celebrations.

“The same SP leaders used to criticise (former Uttar Pradesh chief minister) Mayawati in harsh words for using public resources to celebrate her birthday. But now they are doing the same in a much more vulgar way. We want to know how much money was spent on bringing the Victorian buggy from London and how much was wasted on the entire celebration. Why school kids were forced to line up for Mulayam and why the general public has been kept at bay from the celebrations by the security forces?” BJP state unit president Laxmi Kant Bajpai asked, as quoted in a Daily Mail article.

Back home, loyalists of Datuk Seri G. Palanivel threw the MIC chief a birthday party on Sunday.
It was nothing close to the extravagant Mugabe and Mulayam parties. There was no fancy food and it was held at the MIC headquarters. But his “fans”, spearheaded by MIC strategic director
K. Ramalingam, spent about RM30,000 to host the bash as Palanivel turned 66.

Palanivel posed for photographers with his neatly trimmed moustache, minus the graying hair as he has been recently seen sporting.

Given the rather toned-down celebration — which was clearly a political eyewash to place him in good light given MIC’s current turmoil — it is unlikely he would have spent more than RM1,000 to dye his hair.

The MIC crisis aside, Palanivel is after all a husband and a father. He is only human and I bet he enjoys eating cakes and watching good Tamil movies. He deserves a birthday party, without doubt. But as a leader one must lead by example.

One must understand the plight of the community and ensure his or her actions will not backfire. The party’s strategic director should know better.

A leader would feel for his people. A politician would only feel for himself. It is all about managing perceptions and emotions.

Let’s take the supposed saga involving 1Malaysia Development Board (1MDB). On Sunday, the Internet was abuzz with news by Sarawak Report claiming it had corresponding emails between young tycoon Jho Low and PetroSaudi International Ltd and their alleged links to 1MDB where millions of ringgit were allegedly “siphoned off”.

The government apparently issued a statement to UK’s The Sunday Times, suggesting the possibility of “political motivation” behind criticism of 1MDB and pledged action in accordance with Malaysian law should there be any proof to back allegations of wrongdoings.

There are also claims that Sarawak Report’s “world exclusive” was not a true reflection of the relationship between the parties involved.

But it will be foolish to ignore the fact that the initial report was widely shared — from social media applications to chat groups as many read it on their handheld device. It was already out there.

It would have only been proper to issue a similar statement the local press. There need not be fear when it comes to managing perception. It is always better to address the issue at hand by being transparent and open.

The government was right to say it would take action if there was indeed any malpractice. If only the same statement that was sent to The Sunday Times was also shared with the local media to manage perception back home.

Right or wrong, let’s leave it to the readers to judge. They are not fools and can no longer be fooled. The sooner we understand this and manage perception effectively, the better.