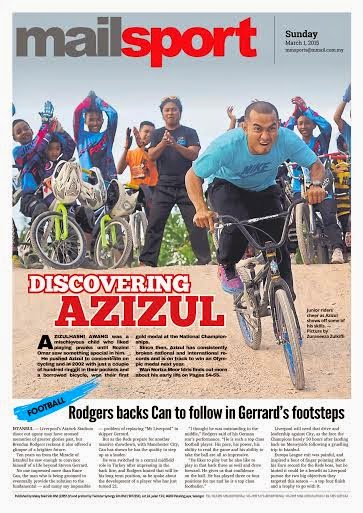 ROZIMI OMAR is the unsung hero behind Azizulhasni Awang’s rise to fame.

The 43-year-old from Dungun was the one who discovered the then 10-year-old and moulded him into the champion he is today.

“Azizul is one of a kind. He is strong mentally and physically. He has good discipline which is hard to find,” Rozimi told Mailsport at his training ground at Bukit Pak Sabah — the same place where Azizul first honed his skills.

“There are a lot of good riders out there but many find it easier to give up. Azizul was different. He was willing to push himself to the limit.

He remembers Azizul as a naughty village boy — but with a good heart.

“As a kid, Azizul loved to play and I had to chase after him to train. He also loved skateboarding and I forced him to choose one ... fortunately he picked cycling,” said Rozimi, a volunteer cycling trainer in Dungun in the 1990s who is now in charge of junior cyclists under the Dungun District Cycling Association and National Sports Council.

“Azizul can ride anything – BMX, mountain bikes, downhill and track. I noticed his speed and asked him to concentrate on track racing.”

Coming from a poor family, money was tight and Azizul went to his first national championship with just RM100.

“It is a memory I will never forget and it helps keep me grounded. My mother (Selamiah Yong) gave me RM100 as pocket money for my first national event in 2002. My coach, too, had about the same amount but we were not deterred,” recalled Azizul

“We had to share whatever we had for petrol, toll, food and drinks. Plus ... we didn’t have a bicycle!
“Upon arrival, we asked around and managed to borrow a bicycle from a goodhearted cyclist. Our only focus was to win and thank God, I won the Under-15 gold medal beating many experience other cyclists along the way.”

Not having enough money for a hotel room, Azizul and his coach spent the night at Rozimi’s friend’s house.
“Thank goodness someone let us to stay at their place. After a few hours sleep, we returned to Dungun the next morning,” Azizul recalled with a smile.

The win boosted Azizul’s confidence and he joined the cycling circuit and continued his winning ways until he received an offer from Bukit Jalil Sports School.

“I spent my Form Four and Five at Bukit Jalil. They polish my skills but I will never forget coach Jimie (Azizul’s pet name for Rozimi).

“He always found time to come to Kuala Lumpur to check on me. He was the one who taught me everything I know.”

Azizul revealed he was quite active in sports and even participated in athletic competitions while at school.
“I actually learnt to cycle from a young age and was cycling around my kampung when I was four,” said the three-time Asian keirin champion.

“When I was 10, I cycled around my village like nobody’s business. Then I came across Jimie’s training place. The place he built to train and teach village boys like me.

“He had seen me cycling and asked me to join him. He convinced me I had the talent to succeed in cycling.  That is how it all started.

“Today, everyone knows John Beasly (national coach) but without Jimie, I would be nothing.”

Azizul said another race that is ‘special’ to him is the 2001 Selangor International Mountainbike event.

“That was my first international race — before I switched to track cycling in 2002.

“I went to Sungai Buloh with just RM50 pocket money given by my mother.

“I was just 14 and needed to stay in Selangor for five days with just RM50. I had to make it last.

“Fortunately I won and was rewarded with RM500. I was so happy and paid my mother her RM50 back.”

Azizul said these memories are what motivates him when he races for Malaysia and the next stop is the 2016 Rio Olympics.
azizulhasni awang cycling dungun john beasley rozimi omar