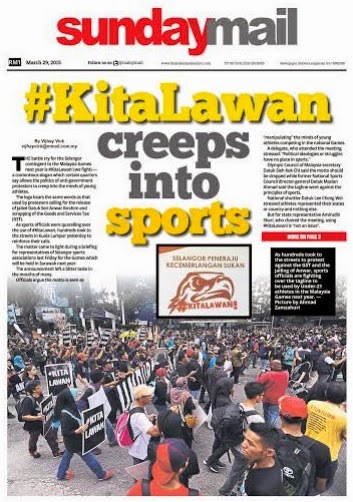 As published in Sunday Mail

The motto, revealed during a briefing with state sports associations at De Palma Hotel in Ampang on Friday, is the tagline used by jailed opposition leader Datuk Seri Anwar Ibrahim’s supporters who are fighting for his release.

The Sukma motto has the words Selangor peneraju kecemerlangan sukan (Selangor spearheading sports excellence) above an eagle’s head and #KitaLawan! below.

The meeting was organised by the Selangor Sports Council and chaired by state executive councillor for sports, Amirudin Shari. Amirudin insisted the tagline was “not an issue”.

Sukma is the national games participated by athletes aged 21 and below. The 2016 edition is in Sarawak.

“It is a tagline associated with resistance. Sukma is a sporting event for the young. It is not right to associate a political campaign with sports, especially with young athletes,” said a representative from a state sports association who attended the meeting.

“Many who attended were unimpressed. Political ideologies or struggles have no place in sports.”
Olympic Council of Malaysia honorary secretary Datuk Sieh Kok Chi said the tagline could be misinterpreted.

“It depends on their intentions. It could be easily manipulated or exploited. It’s best not to have any insinuations or else another party will counter it with another tagline and this will open the floodgates,” Sieh said.

“Selangor should drop it. Sports is not about fighting ... it is about doing your best and trying harder next time.”

He also said sports and politics should not mix. The Olympics ideology is sports should be devoid of religion and politics.

“Just look at the consequences at the 1972 Olympics in Munich where 11 members of the Israel contingent were kidnapped and later killed.

“That incident saw several nations pulling out of the Games. Israel retaliated by bombing parts of Syria and Lebanon.”

Former National Sports Council director-general Datuk Mazlan Ahmad said even noble gestures by athletes, voicing their support for a cause, had received flak.

Awang, who displayed the words “Save Gaza” on his gloves at last year’s Commonwealth Games in Glasgow.

“Certain people use sports as a platform to send a message. Even if done for a good cause, it still goes against the principles of sports,” said Mazlan, who is chairman of the Education Ministry’s sport’s advisory panel.

“Sports is a vehicle to unite people. Sports is neutral. The #KitaLawan tagline leaves a bad taste.”

He said the episode “killed the spirit of Sukma” which has never been politicised since the first edition in 1986.

National shuttler Datuk Lee Chong Wei said it was unfair for athletes to be placed in such a predicament.

“Don’t do this to the athletes. Sports should be above politics,” said Lee.

“This should not happen. Athletes should only be representing their state and no one else.”

This is not the first time sports have been used to seek political mileage.

This did not materialise after Nik Azmi was slammed by football fans and Ultras Malaya even ran a campaign on social media, calling supporters to tear any political flyers or messages at the venue.

In 2007, national shuttlers Koo Kien Keat and Tan Boon Heong were paraded by Barisan Nasional members in Ijok, ahead of the by-elections, after winning the All-England Championship doubles titles that year. 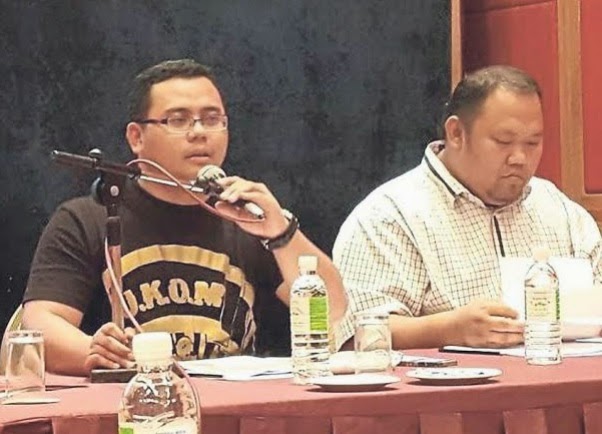 State executive councillor for sports, Amirudin Shari, who chaired a meeting with state sports associations at De Palma Hotel in Ampang last Friday where the logo was revealed, brushed aside suggestions the tagline was to drive a political message.
“It is about the spirit needed in the team. I see no issues with it. But it’s merely a proposal and the state sports council will decide if it will be adopted for the Games,” said Amirudin.
“I don’t think it’s a political message. It is related to our goals to fight and reclaim the overall title. We want to instil that spirit in our athletes.”
He said many other mottos were politically motivated but used prominently in sports, including 1Malaysia.
“If #KitaLawan cannot be used, then many other mottos cannot be used too,” he added.
Selangor were the overall winners in the 2013 edition, ending Terengganu’s five-year domination.
Federal Territories emerged as the big winners at last year’s Sukma.
#kitalawan amirudin shari Anwar Ibrahim Lee Chong Wei mazlan ahmad politics Selangor Sieh Kok Chi Sports sports council