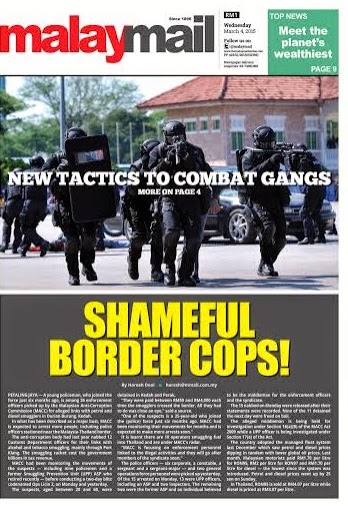 PETALING JAYA — A young policeman, who joined the force just six months ago, is among 26 enforcement officers picked up by the Malaysian Anti-Corruption Commission (MACC) for alleged links with petrol and diesel smugglers in Durian Burung, Kedah.

In what has been described as a major bust, MACC is expected to arrest more people, including police officers stationed near the Malaysia-Thailand border.

The anti-corruption body had last year nabbed 12 Customs Department officers for their links with alcohol and tobacco smuggling, mainly through Port Klang. The smuggling racket cost the government billions in tax revenue.

MACC had been monitoring the movements of the suspects — including nine policemen and a former Smuggling Prevention Unit (UPP) ASP who retired recently — before conducting a two-day blitz codenamed Ops Licin 2, on Monday and yesterday.

The suspects, aged between 20 and 60, were detained in Kedah and Perak.

“They were paid between RM50 and RM4,000 each time the smugglers crossed the border. All they had to do was close an eye,” said a source.

“One of the suspects is a 25-year-old who joined the (police) force just six months ago. MACC had been monitoring their movements for months and is expected to make more arrests soon.”

It is learnt there are 10 operators smuggling fuel into Thailand and are under MACC’s radar.
“MACC is focusing on enforcement personnel linked to the illegal activities and they will go after members of the syndicate soon.”

The police officers — six corporals, a constable, a sergeant and a sergeant-major — and two general operations force personnel were picked up yesterday. Of the 15 arrested on Monday, 13 were UPP officers, including an ASP and two inspectors. The remaining two were the former ASP and an individual believed to be the middleman for the enforcement officers and the syndicate.

The 15 nabbed on Monday were released after their statements were recorded. Nine of the 11 detained the next day were freed on bail.

In Thailand, RON95 is sold at RM4.07 per litre while diesel is priced at RM3.07 per litre.
corruption diesel fuel MACC Malaysia petrol police thailand