Should we include naturalised players in the national football team?

March 24, 2015
Here are two views about the subject. One is by veteran sports journalist Tony Mariadass while the other is by Malay Mail sports editor Graig Nunis. What are your views?

Search in our own backyard

IT is unimaginable national football coach Dollah Salleh — having come from an era of talented home grown players — is keen on naturalised players.

For him to say the current players do not have the right mentality, are not matured, lack physique and do not play quality football only goes to show state FAs and their coaches have failed to groom quality players. Malaysian football did not go bad overnight. It is a culmination of many factors starting with the neglect of development. It is a surprise FA of Malaysia (FAM) has not hauled up Dollah for his statement which tantamounts to saying Malaysia lack talent.

Previous national coaches, B.  Satiananthan and Datuk K. Rajagopal, were subject to scrutiny for suggesting Malaysian football has deteriorated or does not have good strikers. One of the main reasons for our decline is the influx of foreign players in the M-league. The first 10 years since their arrival in 1989 saw the standard of the national team take a nose-dive.

The 1989 SEA Games gold medal in Kuala Lumpur was the last major success until the 2010 AFF Cup victory. The closest Malaysia came to winning a title that time was in 1996 when they finished runners-up to Thailand in the Tiger Cup in Singapore. The best showing was when the Under-23 team emerged as champions in the Under-23 Independence Cup in Bangladesh in 1997. Only when there was a freeze on foreign players did the national team show progress and win regional tournaments.

Now the foreigners are back with an increase to four this year. The rot is going to set in further. How are the local lads going to get their exposure and prove their worth to Dollah? We scream we do not have strikers but this is because the top strikers in the League are all foreigners. Now we have the National Football Development Programme (NFDP) in place and instead of working to make it a success, everyone wants a shortcut. To find talented players to be naturalised is going to be a big task because the better players would already be playing for their respective countries.

Are we going to settle for second best or rely on club-level players to wear our national colours? Dollah explained it was easier to naturalise a foreign player with Malaysian roots. Are there many Malaysians residing overseas?  We are unlike the Filipinos, Chinese or Vietnamese, who have immigrated to all corners of the world. Even if we have Malaysians with foreign roots, what are the chances they are good footballers? Dollah will have more success finding calibre players if he would only take the trouble to comb Sabah, Sarawak, Kelantan, Pahang and even Selangor who are huge states with many remote districts yet to be explored.

Where are the scouts who are supposed to be on the lookout for young talented players? As long as we continue to rely on chance for players to drop in on our doorsteps, we are going to face a dearth of talented players. Malaysia is a multi-racial country, in fact an international nation, where we can find players from different ethnic groups with their own special qualities.

If we can only combine players from all these ethnic groups, we will not only have a truly Malaysian team, but an “international” team. We just need to be open about our selection system and fair when picking the final team.

So Dollah, start looking at every nook and cranny in Malaysia, engage state coaches, even ex-internationals to be your eyes and ears and cast their nets wide and far in the respective states. Dollah, you were a great player and your legacy lives on.

Now leave behind a legacy as a coach by developing new local heroes! 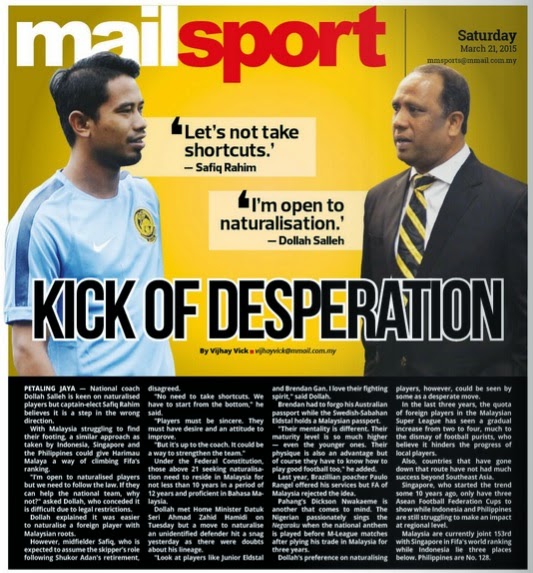 It’s not black or white

THE first thoughts that came to mind upon hearing Black or White Prison was … what the hell? A Michael Jackson-Johnny Cash mash up? How could they ruin the great man's memory?

Jackson may have been the so-called King of Pop but he also stole all his signature dance moves from older stars such as Fred Astaire, James Brown and especially Bob Fosse.

Fosse, a renowned dancer, choreographer, actor and director (he won the Oscar for directing Liza Minnelli in 1972’s Cabaret) was a success on Broadway and Hollywood but not being a mainstream star, flew under the radar.

He was also follically-challenged from young and took to wearing hats to hide his receding hairline and gloves as he didn’t like the way his hands looked. He then incorporated the hats and gloves into his choreography – which Jackson later copied (you can view their similarities on YouTube: youtu.be/w-qUMzMVzdw).

This doesn’t make Jackson any less talented. He was the one who could mimic several of his predecessors’ dance moves and package them into an act which included several decent songs.

It was to be one of Cash’s biggest hits and from that initial “help” he would go on to become one of the greatest singer-songwriters the world has known.

Music fans also know how often songs and tunes are “rearranged” or sampled for a new act while rocks fans went ga-ga over Deep Purple’s Smoke on the water, especially its opening chords – which were stolen from Astrud Gilberto’s Maria Quiet

This goes to show that no matter how big or popular you are, you can always use some help.

It is the same in sports. Sometimes we need help a little outside help to move up.

Japan who are among the best footballing nations in Asia, had assistance from naturalised players like Wagner Lopes, Daishiro Yoshimura, George Yonashiro, Ruy Ramos and Alex (Alessandro Santos) to spark their revolution in the late 1990s and early 2000s.

Perhaps they would have eventually reached their current standards without the quintet – they had a solid development programme in place and the conviction to stick to their guns (Malaysia after all, tried to copy their blueprint) – but we won’t know now.

The Italians have a history of using naturalised players with the inclusion of oriundi or South Americans with Italian stock in their 1934 World Cup winning squad.

Spain World Cup winners in 2010 opted for a Brazilian-born striker in Diego Costa for last year’s tournament (although the move failed as they went home after the group stage).

France and Holland have long utilised their ties with their migrant community and even ransacked their colonial lands for talented players.

Germany who swept all before them in Brazil had Lukas Podolski and Miroslav Klose who were born in Poland but moved to Germany at a young age in their squad while a decade earlier they had the likes of Fredi Bobic (Slovenia), Paolo Rink (Brazil), Sean Dundee (South Africa) and Kevin Kuranyi (Brazil) among a handful of naturalised players in their line-ups.

It took Germany 10 years to rise again and they did by embracing change.

As Joachim Loew said after the World Cup final: “After 2000 and 2004, we were pretty much down as a nation. Sticking with our traditional German virtues was no longer enough – because all countries had them. We had to invest more in education and develop players to make them technically better.

“Unless we changed, we would not go forward. We had to become better on the pitch. We created Centres of Excellence. They brought the results we have seen and we are grateful to the clubs who did that.”

Which brings us to Malaysia.

When Dollah Salleh suggested last week he was opened to naturalise players there was a lot of hue and cry – mostly from old-timers who had served the country well.

No disrespect to them but times have changed and is it any wonder those who were for the idea were the ones currently plying their trade in the M-League.

Having naturalised players could help Malaysia in the short-term but only if the right players – not any Tomaz, Dickson or Hari – were chosen.

Preferably said players should have some sort of connection to Malaysia like Junior Eldstal and Brendan Gan.

If not, we have to weigh the options before opting to naturalise a player.

What we should not do is follow Qatar and buy foreign talent.

As mentioned, this is a short-term solution until the National Football Development Programme (NFDP) bears fruits (hopefully).

It took Germany 10 years to complete their Phoenix-like rise and it would take just as long for NFDP to start churning out the stars of tomorrow.

In the meantime, if the giants of the game can swallow their pride and accept naturalised players, why can’t Malaysia?
dollah salleh football graig nunis Mailsport Malay Mail Malaysia naturalization Tony Mariadass