HARESH SAYS: ‘We are not fools’ 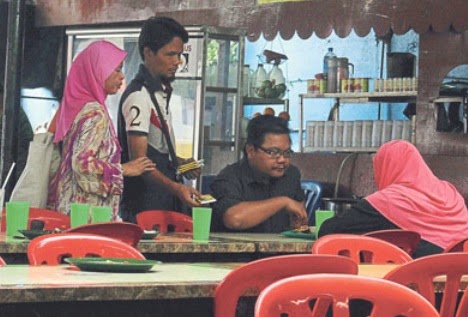 SHAMAR SAAT calls himself a penjaja bebas. What he does is go table to table, selling tissues and calenders.
Blind since birth, Shamar, from Bandar Baru Sentul, explores many places in the city with his cane as a guide, warning him of potholes and kerbs.
“I have a schedule. I’ll be in Chow Kit every Monday, Jalan Tuanku Abdul Rahman on Tuesdays, Cheras every Wednesday and it goes on,” said the 46-year-old.
“It’s not easy but it pays the bills.”
But Shamar will take on a different role next Wednesday. He is expected to join at least 100 other visually impaired people as they gather in front of the Malaysian Association for the Blind (MAB) office in Brickfields to voice their grievances against the association.
Called Solidarity Orang Buta Malaysia — Selamatkan MAB, they have been organising sessions ahead of the gathering. They held one last week at the Society of the Blind in Malaysia building, (also in Brickfields) last Wednesday and will meet again today.
“We are hoping for at least 100 people to show up, although our target is to bring together 300 individuals from the blind community,” he said.
“This is not a demonstration. We love MAB. But we believe the association has derailed from its objectives.”
The group has thus far listed eight points, mainly grouses, as they hope the gathering will “open the eyes” of the people. The points are about:

● MAB’s project in Taman Harapan, Temerloh, which the group claims was not discussed during the association’s council meeting.
● MAB renting an office in Rawang which is apparently owned by its top official. The group says the monthly rental charges are higher than the market rates. The office is used to coach the visually impaired into becoming phone operators. The group says it is illogical to transport a “handful” of students to and fro MAB’s office in Brickfields to Rawang.
● MAB neglecting the welfare of the blind community.
● MAB neglecting the welfare of its members.
● The supposed plans to sell the Tun Hussein Onn National Eye Hospital (THONEH) in Petaling Jaya.
● The questionable contracts involving a top THONEH official with two medical companies (as exposed by Malay Mail  under the heading: “Blinded hospital stumbles over questionable deals” on Nov 22).
● The money spent by THONEH to hire a visiting consultant from India.
● The inefficient training by MAB and that it has failed to provide assistance in securing jobs for the blind.

Shamar says: “The problem with people is that they think the blind are stupid. I have SRP and SPM certificates but I could not further my education as there were not many opportunities back then. Instead, I opted for a vocational course at the Gurney Training Centre to become a phone operator. I graduated in 1989. Till today, I have not been able to find a job as a telephone operator. MAB did not help me.”
“We have mouths to feed, families to raise. I am not speaking about myself alone. There are many young blind people and why should they throw away their future and become tissue sellers because the powers-that-be don’t care? It is time for us to have a voice. We are not fools.”
Interestingly, the event will be spearheaded by an MAB official.
Its vice-president, Hasidi Hassan, who is also visually impaired, has no qualms going against his fellow members. He said this was not an attempt of being anti-establishment, but merely fighting for the rights of the community.
“I don’t care if they decide to sideline me after this. I joined MAB to help my friends and I will continue to do what is right for the community,” he said.
Hasidi said the group hopes to achieve two objectives following the event.
“Firstly, we demand the top officials of MAB step down. We have lost trust in them. Secondly, we want MAB to change its constitution and allow visually impaired individuals to be MAB members. Under the current regulations, one can only be a member if the executive council approves the application,” he said.
Hasidi insists there will be a good turnout next Wednesday.
“I will be there. I know many more of my friends will be there. And if all goes well, we will have 300 people in front of MAB demanding that our voice be heard,” he said.
The “uprising” is not surprising as Hasidi said, “the blind community has been kept in the dark for far too long”. They would like some form of transparency. After all, MAB was set up to serve the blind community. The visually imparied are the largest stakeholders.
MAB, however, is unperturbed by the gathering.
“We believe there are proper ways of doing things. This looks more of a personal fight rather than a fight for the community,” said MAB chief executive officer Datuk S. Ganesan.
“But they are free to gather.
“It is called Malaysian Association for the Blind ... not of the Blind. This is an association to serve the blind community not an association which is made up of the blind community. But we will continue doing our best to help them.”
When told of the matters raised, Ganesan said the authorities are free to investigate the association.
He said MAB had helped about 40 visually impaired individuals to secure jobs as phone operators over the years after they underwent the association’s vocational training in Rawang. He also said Hasidi should know the association’s constitution better and his action was a violation of his code of conduct as an MAB official.
I am sure there are those within MAB eager to serve their community better. It is best if the association engage with its critics instead of shying away. And according to Ganesan, they are even willing to organise a “debate” to iron things out.
MAB may have answers to all the points raised. But the guardians must also realise MAB is not a Sdn Bhd, it is an association, which is of public interest.
Shamar may continue selling tissues but let’s not deprive our younger blind friends from leading a good life. They have plenty to offer.
Perhaps the gathering will solidify efforts to ensure the blind, and the disabled in general, are not taken for granted.

HARESH is executive editor at Malay Mail. He can be reached at haresh@mmail.com.my or on Twitter @HareshDeol
blind Hasidi Hassan Malaysian Association for the Blind S. Ganeson Shamar Saat