Enthusiats to pay more for sports once GST kicks


As published in Mailsport today 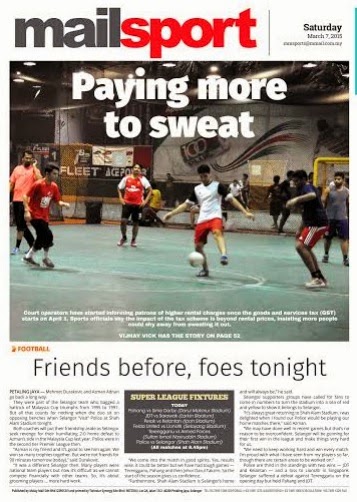 PETALING JAYA - Exercising could cost slightly more come April 1 as futsal and badminton courts operators said they will be raising prices following the implementation of the goods and services tax (GST).
And efforts by the government to promote a healthy lifestyle among Malaysians and reduce obesity and cardio-related diseases could hit a snag as many would be put off by the price hike, stressed sports officials.
At present, one can rent a badminton court at an average of RM28 per hour during peak hours while the rental of a futsal court is about RM100 per hour. Operators have started announcing they will charge and additional six per cent tax on top of their current rates.
"This is the beginning of many other price hikes. We can't just look at the cost of court rentals individually. It may seem as a minimal increase but GST is also slapped on other things including equipment. We must look at it in its entirety," said BA of Malaysia secretary Ng Chin Chai.
"For some badminton is just a leisure activity and they may decide to cut it off their budget to tighten expenditure. But we must not ignore the fact that we need more people playing sports, not just badminton."
Chin Chai said the Sports Ministry should conduct a case study as to how GST would impact society from playing sports.
Olympic Council of Malaysia (OCM) secretary Datuk Sieh Kok Chi said it remained unclear to how the implementation of GST would affect sports.
"There could be a knee jerk reaction initially but perhaps things could return to normal after the dust settles," he said.
"The ministry must study this matter. The government could exempt GST from sporting activities."
He said OCM, which runs and manages a sports complex at Wisma OCM, said they did not plan to increase rentals at this point in time.
A ministry insider confirmed no research was done to gauge the impact of GST on sports.
"We were made to understand that cost of rentals would not go up. But there seems to be confusion and many are waiting the impact of the tax system once implement," the senior official said.
The ministry, had last year, launched FIT Malaysia to encourage more people to adopt a healthy lifestyle and turn Malaysia into a sporting nation. The government also provides for tax relief of up to RM300 for the purchase of sporting equipment.
A study by British media journal The Lancet last year put Malaysia as the fattest nation in the Asia with 45.3 per cent of the population rated overweight. South Korea came in second (33.2 per cent), followed by Pakistan (30.7 per cent) and China (28.3 per cent).