Can't work out in public during MCO? Try walking to the nearest Ramadan bazaar

May 07, 2021
Update 12.01pm: After receiving backlash, the Youth and Sports Ministry will now raise several issues with the National Security Council this evening, including the directive of prohibiting people from exercising in public in MCO areas
-- 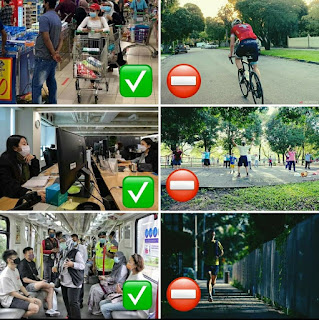 The Movement Control Order starts today in Kuala Lumpur. The MCO started yesterday in six districts Selangor.
What became a huge talking point is the decision to allow Ramadan bazaars to operate but exercising in public spaces is prohibited.
The image above also made its rounds on social media.
A good friend remarked: "At this rate, there's just no point voicing out anymore as clearly the decision makers don't listen, or even think."
He said he will still exercise by "walking to the nearest Ramadan bazaar".
"That way I not only get to work out but also support the traders at the bazaar."
I share his sentiments.