When athletes speak up 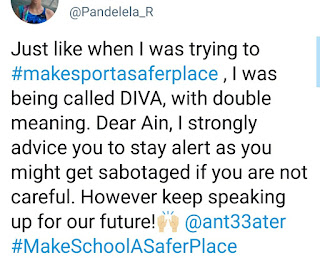 World Cup winner Pandelela Rinong tweeted this in support of Ain Husniza Saiful Nizam.
Ain, 17, revealed her teacher had allegedly made lewd jokes in class. After speaking out, she had to endure backlash including a rape threat from a schoolmate.
Recently an individual who many claim to be Ain's school principal had made unsavory comments against the teenager on Facebook.
Pandelela, being an international athlete, used her platform to throw her support for Ain. And her tweet has gained plenty of traction. That's the power of an athlete.
This reminds me of a webinar I was involved in last Thursday. I was invited by World Learning as a guest speaker alongside Dr Lindsay Krasnoff of New York University, Dr Muqtedar Khan of University of Delaware and Dr Loic Tregoures of Catholic University of Paris.
We discussed about sports and politics.
Just before we ended, I raised a scenario. When politicians use sports to take a stand or promote a narrative, it oftens invites criticism. When an athlete takes a stand and promotes a certain narrative, he or she is celebrated.
A guest of the webinar remarked: "Who decides what is right or wrong?"
As for the tweet above, I'm with Pandelela and Ain. Keep speaking up for our future. It's a stand we have taken and it's a stand we will stick with.
What is your stand?