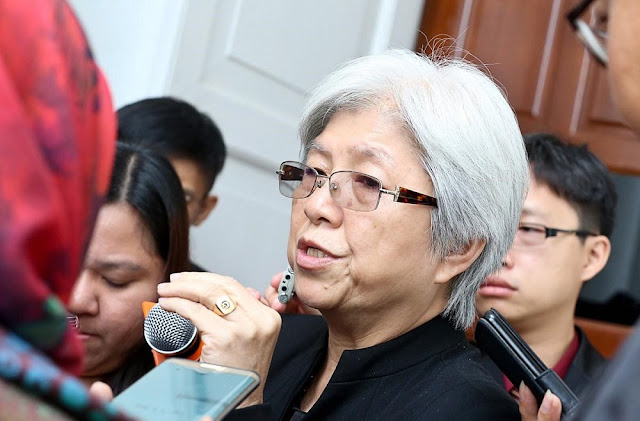 This is a press statement by Pakatan Harapan Wanita Chief Chong Eng. She is also Penang exco for social development and non-Islamic religious affairs and a long-time activist for women's affairs.

National swimmer Cindy Ong’s shocking revelation should be taken seriously despite the fact that the alleged sexual harassment took place 20 years ago when she was a teen.

The media report also disclosed that sexual harassment did not only happen to Ong but also other young male athletes, who were victims of sexual harassment too, according to a former national swimmer who remained anonymous.

The Youth and Sports Ministry should take immediate action to start looking into establishing a channel for athletes to lodge a complaint to prevent a repeat of such incidents in future while assisting Ong to lodge a police report.

Then the ministry should start probing the allegation by Ong and also find ways to protect other athletes, especially the teenage athletes.

While the Sexual Harassment Bill is yet to be tabled in the parliament, the code of practice on the prevention and eradication of sexual harassment in the workplace has long been in place since 1999.

The Youth and Sports Ministry should take the cue from the code on sexual harassment to set up a similar mechanism for athletes and make sure that it is an effective channel too.

A diving coach was charged for rape but he was freed by the high court in its appeal last year on ground that the prosecution failed to prove the case beyond reasonable doubt.

In 1996, national athlete coach C. Ramanathan was convicted of molest charges on two junior athletes aged 15 and 16, an offence committed at the Malaysian Amateur Basketball Association building in Jalan Hang Tuah between 9am and 10pm on Oct 23 and 27 in 1992.

There are reasons to believe that such cases are just tip of the iceberg as many suffer in silence for fear of backlash or being rejected to be fielded as athlete for voicing up.

Existing committees – the Athlete Representative Committee, the Misconduct and Harassment in Sports Committee and the Athletes’ Commission under the Olympic Council of Malaysia should not remain as a toothless tiger but an effective entity for one to lodge a complaint on sexual harassment.

Male and female athletes should not be the focus of attention only but also staff, especially the junior ones and those lower in ranking to be given the liberty to lodge similar complaint.

The media is good at highlighting such sexual abuse but it is not the right platform for one disclose such harassment, with the culprit not facing the music.

While the sexual complaint receives attention after being highlighted in the media, the sexual harassment is not solved once and for all.

For a long term solution, a proper channel should be set up for the victim to lodge the complaint and the complaint to be dealt with in an effective manner.