Will BWF take action against BAM for banning Israeli shuttlers from playing in Malaysia Open? 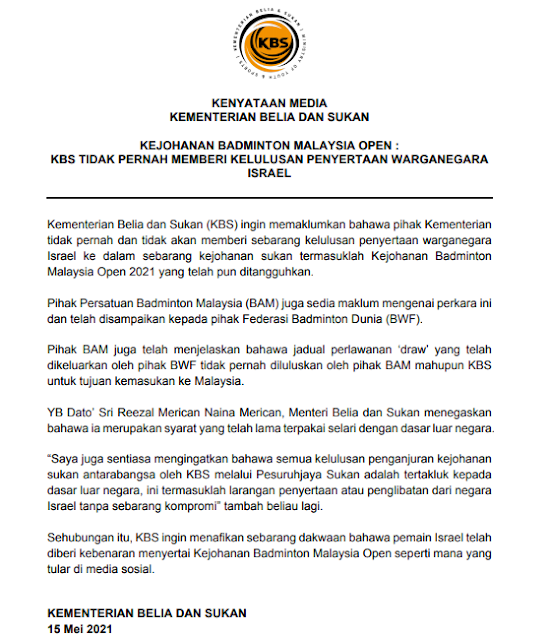 The Youth and Sports Ministry said it did not give any approval to the any Israel national to participate in any sports events in the country - including the Malaysia Open which has been recently postponed.

The Malaysia Open was scheduled May 25-30 but the BA of Malaysia (BAM) postponed the meet due to the rising number of Covid-19 cases.

If the Malaysia Open is rescheduled to a later date and the Israeli shuttlers still qualify, they will still not be allowed to enter into Malaysia as the country does not have diplomatic ties with Israel. BAM is bound by the immigration rules of the country.

Nevertheless, several Israelis have been to Malaysia. Yossi Benayoun and his Chelsea team played against a Malaysian XI in 2011. Benayoun was jeered by a small section of the crowd during the exhibition match. Chelsea lodged a complaint and the FA of Malaysia (FAM) said:

"From our initial observations, if such an incident took place, it would have involved a small section of spectators at the match and this surely does not reflect the feelings of the majority of fans in this football loving country.

"The FA of Malaysia would like to strongly register that we do not condone any form of racism in football. If such an incident did happen, we would like to apologise to the player concern, and also to Chelsea FC."

In 2018, David Roet became the first Israeli diplomat to visit Malaysia since 1965 when he attended the World Urban Forum (WUF9) held in Kuala Lumpur.

In 2019,  Malaysia was stripped it rights to host the 2019 World Para Swimming Championships which was scheduled to take place between July 29 and August 4 in Kuching, Sarawak.

The International Paralympic Committee, had in a statement, said:

“In September 2017 when the IPC signed the contract with the Paralympic Council of Malaysia (NPC Malaysia) to host the World Para Swimming Championships, we had assurances that all eligible athletes and countries would be allowed to participate in the event with their safety assured.

“Since then, there has been a change of political leadership and the new Malaysian government has different ideas. Politics and sport are never a good mix and we are disappointed that Israeli athletes would not have been allowed to compete in Malaysia.

“As a result of the Board’s decision today, we are now looking for a new host for this vital World Championships, which acts as a qualifier for the Tokyo 2020 Paralympic Games. We will strive to maintain the same dates and conditions for the Championships as to not upset the training schedules of athletes who aim to peak for the end of July and early August. However, we may need to be flexible in this area bearing in mind the circumstances we face.”

If the Malaysia Open is eventually held and the same Israeli athletes are to participate, will BWF take action against BAM?