Should the Tokyo Olympics be held? 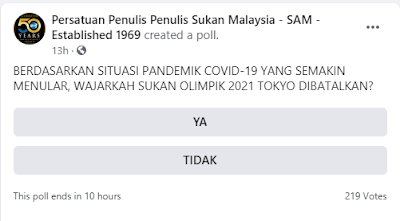 The Sportswriters Association of Malaysia has started a poll on its Facebook page.

At the time of writing, 80 per cent has clicked on YES.

There are obviously concerns. One was highlighted by The Star's Lim Teik Huat in his column today.

He highlighted paragraphs from the Olympics Playbook that read:

“We trust that the measures laid out will mitigate the risks and impacts involved in participating in the Games, and we fully count on your support to comply with them.

“However, despite all the care taken, risks and impacts may not be fully eliminated, and therefore you agree to attend the Olympic and Paralympic Games at your own risk.”

Then there's a tweet - that the Malaysian contingent's participation to Tokyo has been rejected - that has been debunked by the Olympic Council of Malaysia and National Sports Council. It's "fake news", they say.

The locals in Japan are rejecting the Summer Games to be held as the Covid-19 situation there is critical.

The Asahi Shimbun newspaper, an official Tokyo Olympics sponsor, has also called for the games to be cancelled.

In Malaysia a stricter "total lockdown" will be enforced starting Tuesday - also due to the spike in Covid-19 cases.

Read CNN's What could happen if the Tokyo Olympics get canceled? and South China Morning Post's Tokyo Olympics: how Japan’s coronavirus failures have left a dark cloud hanging over the Games.