Dr M once represented Langkawi in Dota2. Believe it. After all sports associations are allowing history to be distorted. 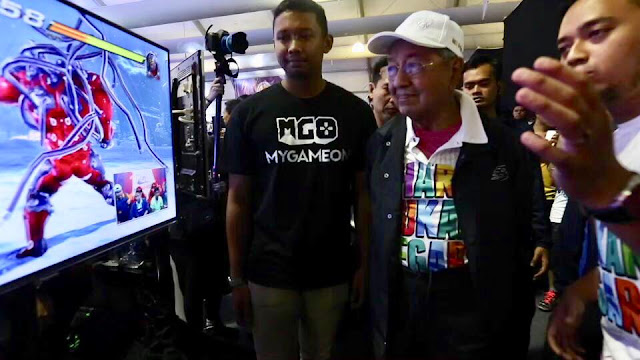 We don't know our history. Period.
We don't even know our athletes. Period.
Example:
DATUK SOH CHIN ANN (not Chin Aun)
Refer to this article in The Star: Chin Aun’s name may be misspelt but he committed very few errors on field
Until today legendary skipper Datuk Soh Chin Ann does not understand why was his name is spelt as Chin Aun. But that name is held in high esteem as one of the best defenders in Asia at the height of his powers in the 1970s.
“When I pointed out the correct spelling of my name to my media friends, they simply shrugged it off. Perhaps they thought Ann was girlish. So the name Chin Aun stuck.”
The Malaysian and Singapore papers carried his name as either Chin Aun or Chin Ann with no uniformity.
Example:
DATUK ASIRVATHAM VICTOR A/L ASIRUVATHAM (participated in two, not three Olympics)
National news agency, Bernama, reported that Asirvatham - who passed away yesterday - represented Malaysia in three Olympics and won 14 gold medals in the SEA Games and four silver medals in the Asian Games.
Senior journalist, Devinder Singh messaged me the full list of Asirvatham's international stints complete with links:
1961 Seap Games 4x400m gold
1965 Seap Games 400m gold
1965 Seap Games 4x400m gold
1967 Seap Games 400m gold
1967 Seap Games 4x400m gold
1973 Seap Games 4x400m gold
(http://www.gbrathletics.com/ic/seag.htm)
1964 Olympic Games 4x400m 6th H3 R1
1968 Olympic Games 400m 6th H2 R1
1962 Asian Games 400m 5th final
1962 Asian Games 4x400m silver
1966 Asian Games 4x400m silver
1970 Asian Games 400m 6th final
1970 Asian Games 4x400m bronze
1962 British & Empire Games 440y 4th H4 R1
1962 British & Empire Games 4x440y 4th H1 R1
Notes
- Did not go to 1969 SEAP Games after being suspended by Perak AAA for "missing state centralised training and selection for the national championships and showing disregard for the rules." Victor, in his defence, said he had to care for his ill father, P.  Asiruvatham, who died two months before the SEAP Games.
(http://eresources.nlb.gov.sg/newspapers/Digitised/Article/straitstimes19690806-1.2.152)
- 6 gold medals at the SEAP Games, not 14
- Competed in 2 Olympic Games, did not go to 1972 Munich (http://eresources.nlb.gov.sg/newspapers/Digitised/Article/straitstimes19720620-1.2.112)
- won 2 silver & 1 bronze at Asian Games, not 4 silver. Did not go to 1974 Teheran (http://eresources.nlb.gov.sg/newspapers/Digitised/Article/beritaharian19740712-1.2.40)
To the influential and wise people running sports associations in Malaysia, where are the full data and statistics of our national athletes? Their full names, their accomplishments - the basics? The Malaysia Athletics Federation doesn't have such a list on public domain, thus the confusion regarding Asirvatham's achievements.
We even have a missing trophy (Burnley Cup) that no seems to be bothered about.
Blaming the media is easy. But what proactive steps have national sports bodies taken to put the facts out in public. "I got not time" syndrome?
Or are national sports associations happy with the fact that history of their sports and athletes are being distorted along the way.
Who knows, 30 years to come, we might read that our former Prime Minister Tun Dr Mahathir Mohamad once represented Langkawi in Dota2.
If we can add an Olympic event and gold medals to the accomplishment of a fallen Olympian, why can't we do the same to a former prime minister?
Salam Aidilfitri to all!
NOTE: Dr M never represented Langkawi in Dota2. I cannot verify if he has even heard or played the game.