I'm too sexy for my skirt 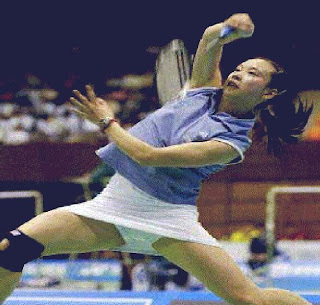 To skirt or not to skirt, that is the question.

The Badminton World Federation (BWF) has decided to postpone the implementation of skirts on the courts by female shuttlers - as reported by Reuters here.

While Pi Hongyan (pic), who now plays for France, has no qualms putting on a skirt, most the Asian players are quite uncomfortable.

The skirt ruling is to simply to make the sport more "attractive" and "marketable".

Marketing agents in the sport claim that it doesn't help when some of the female players tend to sport "boyish-hairstyles" and put little effort in "beautifying themselves". Others bluntly say "the players look like boys."

But India's Saina Nehwal is unhappy with the skirt ruling while the Chinese players tend to agree.

Perhaps the female shuttlers think they are too sexy for skirts. Oh well.