Dharmaraj: It's not enough 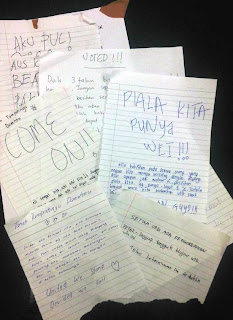 If given a choice, national junior hockey coach K.Dharmaraj would like to enjoy some sleep.

Yet, that will have to take a backseat as his team - fresh from winning the 7th Junior Asia Cup over the weekend - will play at least two opponents who will compete in the coming Sultan Azlan Shah Cup in Ipoh.

Dharmaraj and team manager Minarwan Nawawi have turned into instant celebrities as their phones were ringing all the time while getting ready for their show on Astro Arena's Kafe Sukan. In fact, there was a joke that Minarwan could be getting a Datuk-ship soon.

However, Dharmaraj and Minarwan revealed an interesting fact - of the motivational words penned down by the players and members of the coaching staff (pic) prior the final. They were eager to beat Pakistan and win the title.

The boys even played mind games as they had words on their training kits questioning the age of Pakistan skipper Umar Bhutta while warming up minutes before the final.

This certainly got the Pakistanis fuming. But the losing side are planning to lodge a complaint to the world body as they believed there was 'biased umpiring'.

“I have the video as evidence and we will file a formal complaint against them in the World Hockey Federation.”

More importantly, Dharmaraj said that the win is not enough.


"There is still a long way to go. There's the Junior World Cup, Asian Games and qualifying for the Olympics. We may have won the Asian level, but there's a lot to be done to be at par with the world's best.

Wining the Junior Asia Cup is no guarantee we can qualify for the next Olympics."