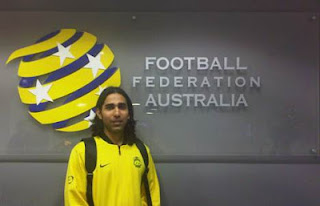 I have not been able to update Foul! for the past week as I have been away - to Sydney, Canberra and Melbourne within the past seven days to be exact.

The trip was sponsored by the Australia-Malaysia Institute, an initiative funded by the Department of Foreign Affairs and Trade (DFAT) Australia.


Rest assured, no duit Rakyat Malaysia was spent. And the only thing I bought for myself is a didgeridoo which I got at a good bargain - AUD40 (RM123.20).

It was a hectic but good trip as I was the sole Malaysian journalist in the group. The rest were Bangkok Post sports editor Wanchai Rujawongsanti, Siam Sport journalist Adinun Muenyang, another Thai journo Supachoke Nuamnim and Korbua Laorujijinda - the media officer for the Australian Embassy in Bangkok.


We met many people, from the Australian futsal team and representatives from the Football Federation of Australia in Sydney, Aussie swimmer Geoff Huegill, visited the Malaysian High Commission in Canberra to exchanging thoughts with officials from Tourism Victoria, DFAT and watching an Aussie rules football match in Melbourne.


More importantly, I had dinner with national cycling coach John Beasley and his lovely wife Vicki. A day later I followed John to meet Azizulhasni Awang, Josiah Ng and Fatehah Mustapha who are currently training in Melbourne.


Also, I got my hands on a report conducted by two Australians who were in Malaysia recently. And they had plenty to say about the National Sports Council.Very interesting comments I must add.


More will be revealed as the articles will be published in Mailsport in days to come.


HD says: I sadly did not get to see any kangaroos or koala bears. The only kangaroo I saw was on the tail of a Qantas airplane. I guess I should have been a typical government servant on a "lawatan sambil belajar" instead of trying to play ambassador for Malaysia.