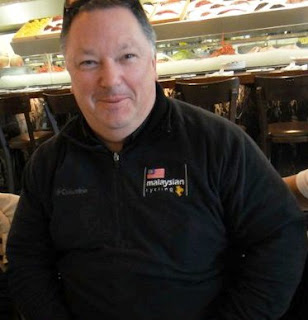 IT was a chilly Thursday morning in Melbourne. John Beasley (pic) was at the doorstep of The Windsor Hotel at 7am as promised as he drove Mailsport’s senior journalist Haresh Deol to the suburbs where the national cyclists trained.
Along the way, Beasley left his wife Vicki off at their family owned business – Beasley Cycles. John and Vicki are the third generation of the Beasleys to run the shop which started business in 1919.
Early at the Elite Sports Gym were Olympics-bound Azizulhasni Awang, Josiah Ng and Fatehah Mustapa.  Even several junior athletes including Malek Marcus Mccrone and Jupha Somnet were also at the gym as they prepare for the UCI Juniors Track World Championships in August.
Beasley has played an instrumental role guiding the riders to glory. Yet, he isn’t exactly a popular figure especially among members of the Press and officials.
The no-nonsense coach takes time off from his daily routine as he speaks about the Olympic preparation, his misunderstood character and his plans of revolutionising cycling in Malaysia.

Mailsport (MS):  How would you rate the progress of our riders at the moment?
John Beasley (JB): Things are going on track. The speed comes later but the powers we’re hitting are encouraging. There are two competitions coming up in Germany (Cottbus on July 7 and Cologne July 22). It’s for good competition and to gauge where we’re at.

MS: How would you rate Azizulhasni at the moment?
JB: Azizulhasni is back better and stronger. He is not as fast as he used to be but we work on that in the last phrase of the training. There is a need for him to be confident. Look, many tend to forget about the splinter injury (where a splinter from the track went through his left calf at the Track World Cup in 2011) followed by a knee injury. And now he’s making progress and the ultimate goal is the Olympic. He’s a great chap, puts in the extra effort and is chalking impressive power outputs. I can’t ask for more really.

MS: Are we capable of a podium finish?
JB: I think one podium finish is achievable. If we get two, it will be a dream. To finish first, second or third in the Olympics is already an unbelievable achievement.

MS: Do you think we’re too fixated winning the elusive Olympic gold medal that it’s taking a toll on everyone, including Azizulhasni?
JB: Malaysia is a pretty new sporting nation and your Olympic gold medal will come, if it’s not this year, it’ll be at the next Games. It does annoy me to how people say stupid things but we have to go out and do our best. I’m sure (national shuttler) Lee Chong Wei is facing the same pressure too so are the other athletes. An athlete may have done his best and did not win a medal, do you still consider that as a failure?

MS: You have ticked a lot of people off, including your ban of not allowing the Media to interview the cyclists during races.
JB: I don’t care how people perceive me. I’m very protective of my athletes. I know I’m doing the right thing for the nation. If I’m the bad boy so be it. There are a lot of Media I respect and some I don’t. Respect has to be earned.

MS: There are talks of getting the National Sports Institute to work on a new technology that could revolutionise cycling around the globe. Care to explain?
JB: Malaysia has a smaller pool of talents compared to bigger nations so we have to do things the smarter way and it’s based on technology. I’ve got good knowledge in cycling but there are other aspects I need help from the experts. The NSI and a lecturer from University Kebangsaan Malaysia have been approached to develop a power crank which will help us study our riders better and this could be the first in the world. Also, we’ve in the midst of sending bicycle simulators to Malaysia in batches mainly for talent identification and also for the riders to gain experience riding on various simulated tracks.
There are also plans to start a talent scouting programme, kind of like a reality show, with a local broadcasters by early next year. If that goes well, then it’s good. Otherwise, we’ll still carry on with our nationwide programme. I’m sure Malaysia have many more good cyclists. All we need to do now is to unearth them.

MS: Isn’t that the work of the Malaysian National Cycling Federation?
JB: I guess it is up to the government to have guidelines of what a federation is responsible for. Coaches and riders are evaluated every race but who monitors the officials? I am not bashing the national body but someone has got to keep the federation accountable. Here we have the federation getting involved in big races but what about talent identification and grassroots development?