Of Proton, Lotus and Dany Bahar 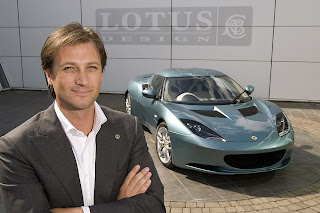 Those in the scene are eager to find out about Dany Bahar's (pic) suspension.

“As a result of a number of media inquiries, Group Lotus plc (“Lotus”) can today confirm that, following an operational review, chief executive Dany Bahar has been temporarily suspended from his role to facilitate an investigation into a complaint about his conduct made by Lotus’ penultimate parent company, DRB-HICOM Berhad.”

"Dato’ Sri Haji Mohd Khamil Bin Jamil, Proton's new Chairman, visited Hethel on Wednesday 2nd May and reassured the management team and staff representatives that DRB-HICOM is not thinking about a sale of Lotus right now. He also made it clear that a sale still could be an opportunity, but it is not DRB-HICOM’s priority to consider this right now for Lotus. That’s what we were told and I have no reason to question it.

Dato' Sri is aware that the uncertainty is damaging the business and the brand, but he said that he needs time to completely understand the business before making a decision about Lotus and this could take a few months. This makes our life very, very difficult, but I have no choice but to accept the situation and be patient. We presented him with our journey so far since the Paris Motor Show 2010 and he was heavily impressed with what he saw, not only with the current line up, but he showed a special interest in the future cars.

The takeover of our parent company Proton by DRB-HICOM couldn’t have come at a worse time, but – again - up until that point Lotus was on track to meet the major milestones as set out in the five year business plan. The takeover process has put Lotus in a very difficult situation and it is very frustrating that the only thing we can do is to wait for a final decision how to move forward. In business sometimes things happen outside of your control and you have to do everything you can to make the best of it."

And just slightly over a month ago, Dany had - in an exclusive interview with UK's The Sun - said;

“I remain confident and committed that we can bring Lotus back to the top.
We have a healthy order book of 1,127 cars but due to the takeover it has been a very difficult time.
We have spent the last two weeks discussing in detail with our new owners our investment plans and all aspects of the business.
They know the situation Lotus are in, and it is in their interest to resolve the issues as soon as possible.”

Oh and not to forget, apparently Syed Zainal Abidin will quit Proton at the end of the month.Ye ke??