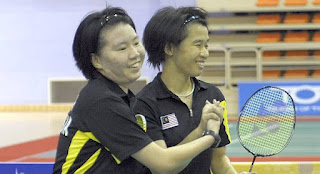 Even if they do play a couple of tournaments after this, it is evident both players are seeking to hang their racquets pretty soon and try their hands at coaching instead.

The duo were eager to make their third appearance at the London Olympics but that didn't materialise. Eei Hui and Pei Tty feel there is nothing more to look forward too.

Read Rajes Paul's article on the two lasses here while KM Boopathy writes his preview of the tournament here.

All the best in the Malaysian Open to the duo and thank you for all your contributions.

Meanwhile, the Tourism Ministry is now playing an active role with the BA of Malaysia as they work together to organise the Sudirman Cup next year. Read all about it in today's Mailsport.

HD says: So I guess it's coach Eei Hui and coach Pei Tty from now one eh? :)