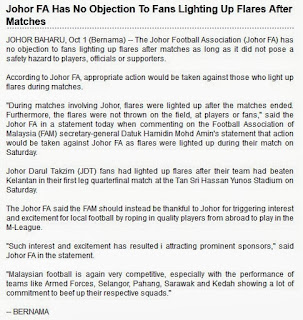 Who said what? Taken out of context or speaking without proper evidence?

This is the subject raised in Haresh Says today citing the recent comment made by the FA of Malaysia against Sarawak which received flak from the fans.

Meanwhile, have Johor FA shot themselves in the foot?

It looks like it after the FA had publicly said they have no problems with fans lighting up flares after the match.

Now this is a big no-no under Article 52(c) of Fifa's Stadium Safety and Security Regulations.