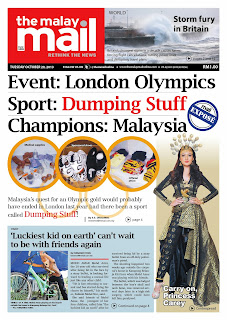 Haresh Says, as published in The Malay Mail today.

ONE tends to wonder who actually runs Malaysian sports.

Political and governmental interference is a big no-no as far as international sports bodies are concerned.
However, where do we draw the line?

It is no secret government money is used to fund athletes and sports in most countries including Malaysia. Developed countries like China, England and Australia spend millions prepping their sportsmen for the Olympics in pursuit of gold medals, honour and to a certain extent bragging rights.

But does that give the government — or certain government officials — the right to lord over the national sports associations (NSAs)?

The Sports Ministry, mainly its funding arm the National Sports Council (NSC) seem to have a lot to say when it comes to sports governance and more recently, the selection of athletes for international games.

Last week NSC, urged the Malaysian Athletics Federation (MAF) to include experienced high jumper Lee Hup Wei and hurdler Noraseela Khalid for the Myanmar Sea Games despite the duo having failed to make the cut.

Over the weekend, the council chided the BA of Malaysia over the deteriorating performance of national shuttlers — as reported by national news agency Bernama.

These were among the many instances of NSC having a say in almost everything and anything in the local sports scene.

Do also read what our national contingent left behind at the Olympic Games last year, as revealed by SS Dhaliwal in The Malay Mail today (pic).