STATES WANT A CHANGE IN LEADERSHIP


Seven State Kabaddi associations want a change in the leadership of the Kabaddi Association of Malaysia (KAM) and want the transformation to take place through an Extra Ordinary General Meeting this Thursday. 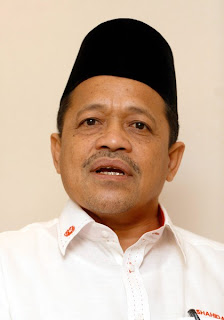 A request to call for the EGM was made almost a month ago, but the current KAM executive committee chose to ignore the request.


Perak Kabaddi Association president Datuk Dr G Krishnan, who is also the current KAM vice president, said that there has been no official reply to the request made by the secretary or any of the key principal office bearers of the KAM.


“The request was made as per the KAM Constitution. Since the secretary failed to do his duties, we have called for the meeting as per the provisions in the KAM constitution,” said Dr Krishnan.


The EGM scheduled for Thursday 24th October, 2013 at 10.00am at the Olympic Hall, Olympic Sports Hotel, will debate and deliberate on several issues.


The first is to nominate and appoint a new president in place of Datuk Seri Dr Shahidan Kassim (pic). With the Sports Ministry in line with the Malaysian Cabinet decision, barring current Ministers from holding any posts in sports association, the seven states wants to quick replacement to chart the future of kabaddi in Malaysia.


The second motion to be discussed is a motion of no confidence against the current KAM Deputy President Maniam Manikkam.


“Apart from the seven states that have requested for the EGM, we do believe a number of others would also support the motions,” said Krishnan.


The other state kabaddi associations in the country are Perlis, Kedah, Kelantan, Melaka, Sarawak and Pahang.


With the exception of SUKMA, where kabaddi is one of the optional sports, there has been virtually no national level programmes for kabaddi. The SUKMA earlier this year was also mired by controversy after Perlis were kicked out of the competition for fielding an ineligible team. It is pertinent to note that both the top two office bearers of KAM are from the state.


Johor Kabaddi Association president M. Chandran said that the EGM was important for the future of kabaddi in Malaysia.


“The game is getting more popular in Malaysia among all communities but sadly there is lack of support at the national level,” said Chandran.


Kabaddi Association of Kuala Lumpur president S.T. Arasu echoed Johor’s statement, adding that exceptional players from some states have been systematically ignored by the national body.


“We need an unbiased and fair treatment of players, officials and affiliates for the game to move ahead,” he said.