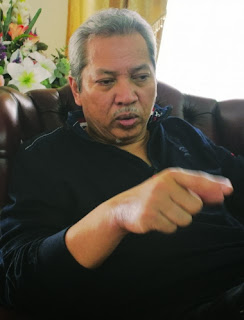 Umno’s Ketereh division leader Tan Sri Annuar Musa has described the new rules ahead of the party polls as similar to that of a “beauty pageant”.

“You take the candidates on a stage, introduce them to the delegates and they wave. This is not how you select a leader.

“The Umno elections are not a beauty pageant,” Annuar said.

He said candidates should be judged based on the way they debate, articulate ideas, express their thoughts on current issues and should be given the opportunity to interact with the voting delegates.

“We must take the spirit of the liberating power of the grassroots. Delegates should be allowed to meet and know their candidates.”

The Mara chairman said this when met at his house in Bukit Damansara. He was discharged from hospital last Saturday after being admitted for dengue fever for more than a week.

HD says: Annuar Musa revealed he has only been admitted in a hospital twice - once for a motorcycle crash during his younger days and for dengue fever recently.
Bukit Damansara Ketereh Mara politics tan sri annuar musa The Malay Mail Umno