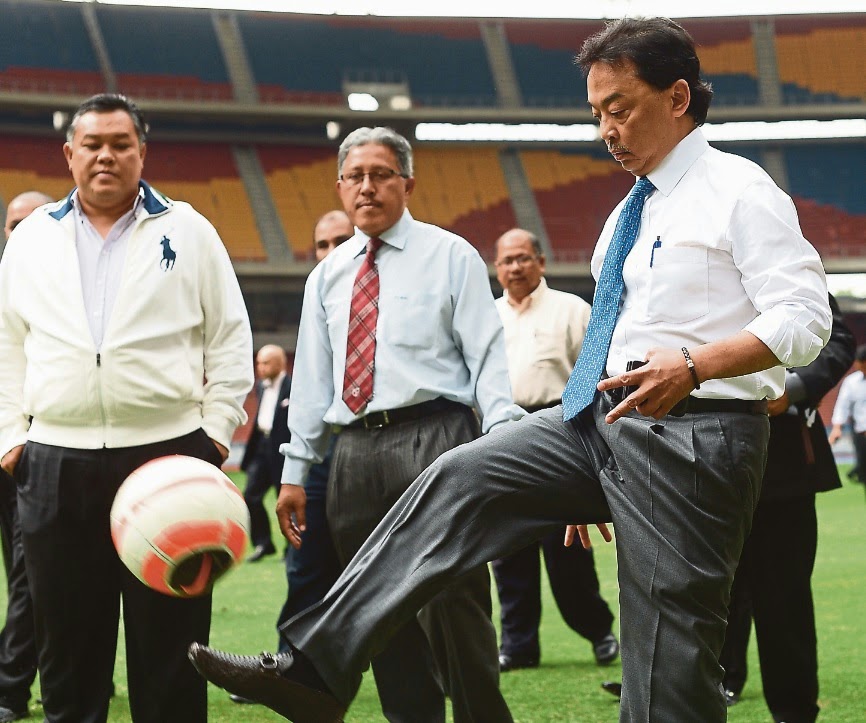 That was the message by FA of Malaysia (FAM) president Tengku Abdullah Shah to the men in blue after chairing the Malaysia Cup security committee meeting at the National Stadium in Bukit Jalil yesterday.

His anxiety comes as no surprise as the National Sports Complex is set to host three events — the final between Pahang and Johor Darul Takzim, the Lan Berambeh Anak Sarawak 2014 Carnival at car park A and B outside the main stadium and a Buddhist prayers event at the nearby Putra Stadium.
Some 150,000 people are expected to flock the complex. Football fans have been advised to head to the stadium by 2pm —more than six hours before the kickoff at 8.45pm.

But fans will only be allowed to enter the stadium after 4pm.

“We need the cooperation from the fans. Otherwise, the police will not be able to handle the volume of people,” said FAM security committee deputy chairman Datuk Osman Salleh.

Cheras OCPD ACP Chong Kok Sin refused to reveal the strength of their workforce on Saturday but FAM deputy president Datuk Seri Afandi Hamzah later revealed the number of personnel would exceed 2,000. Chong, however, assured the police will be at the venue as early as 8am and stay on until “everyone leaves the area”.

KL traffic operations office ASP Mohd Irwan Abdul Rahim said: “Road closure will be as per necessary. No decision has been made and any closure will be based on the situation at that moment.”

Why is FAM insisting on organising the match in Bukit Jalil instead of Shah Alam Stadium?

“It is the best stadium in the country and we need a big stadium so the fans are not left disappointed,” said Afandi, who is also the competition committee chairman.

“Hopefully everything goes on smoothly. We pray for that.”

FAM were informed by Pahang FA and Johor FA that between 300 and 500 buses ferrying fans will make their way to the stadium. But fans would be forced to walk for 3km as buses would only be allowed to drop off passengers at the stadium if the situation permitted.

Buses ferrying Johor fans would be parked at the Technology Park while buses from Pahang would be stationed at Selangor Turf Club.

Other fans have been advised to take public transport but it remains unclear at what time the services will end.

“Trains will leave the station every 3.5 minutes after the game. Each train could accommodate between 1,000 to 1,200 people. The trains will run until the crowd is clear,” said Prasarana group communications and strategic marketing executive vice-president Lim Jin Aun.

“I can’t say we will wait until there is zero people. We have experienced crowds like this and those on duty at the stadium know what to do.”

However, he was only speaking in regards to the Ampang LRT Line as the Kelana Jaya line will close as usual.

Tengku Abdullah (right) juggles a ball after inspecting the pitch at the National Stadium yesterday. — Picture by Razak Ghazali
__________

PETALING JAYA — The online ticketing system, introduced by FA of Malaysia this year to eliminate counterfeit tickets and ease congestion on match-day, brought about a new problem.

Fans claim they were unable to purchase the tickets from http://system.tickethotline.com.my yesterday.

“It was impossible to make a booking. Our supporters were eagerly waiting to purchase the tickets online as we knew it would go on sale (yesterday). We tried buying tickets since 10am but was unsuccessful. Later we were told the tickets were sold out by 1pm,” said Johor Darul Takzim supporters club president Azman Abdul Jalil.

“Our only option now is buy tickets at Larkin Stadium.”

Some 20,000 tickets will be up for sale at the stadium while another 20,000 distributed to the various fan clubs.

“There were some of our fans who managed to get the tickets but they did not receive a soft copy of their receipt and no e-mail notification to validate their purchase,” he said.

“I visited their office in Damansara (yesterday, 4pm) to confirm my ticket purchase. I was told by their staff that 252 tickets were available online although the website indicated ‘sold out’.”

“It is a sheer inconvenience as fans spent hours online trying to buy the tickets.”