October 05, 2014
As published in Mailsport today 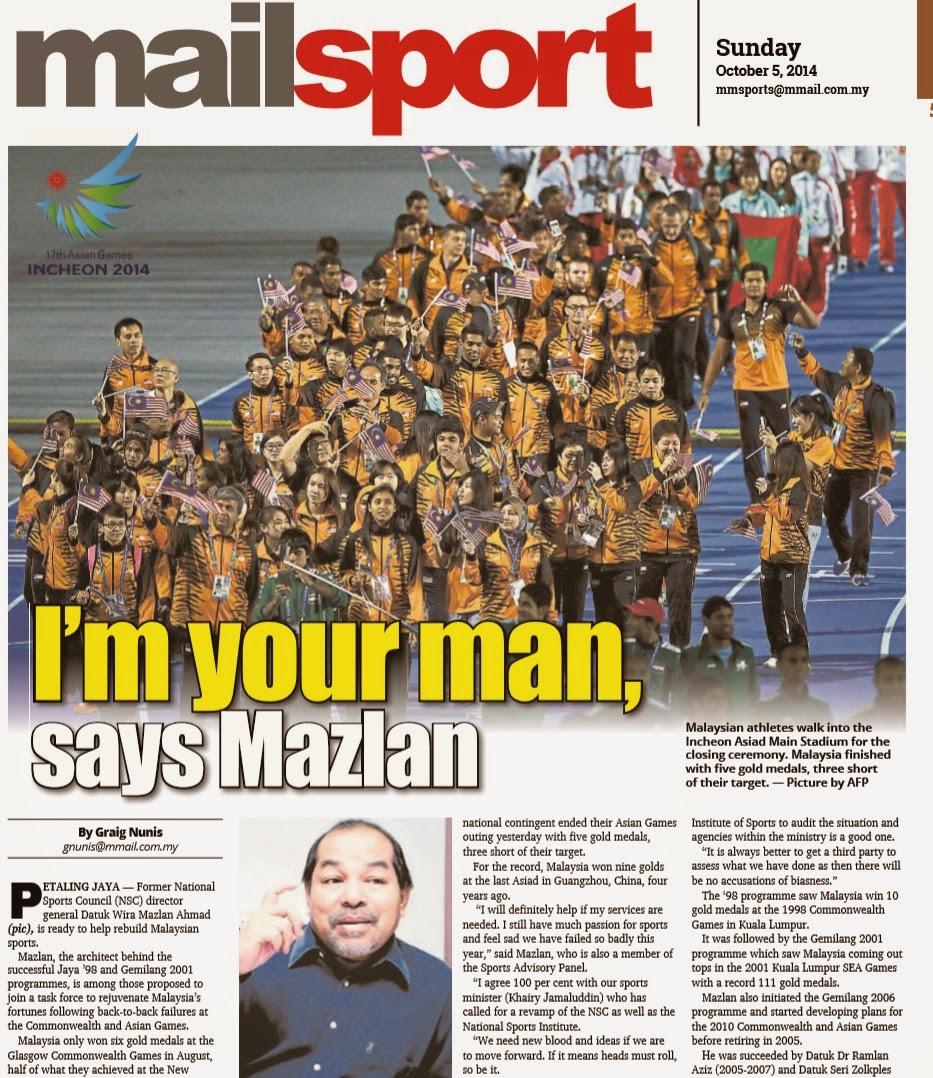 Mazlan, the architect behind the successful Jaya ’98 and Gemilang 2001 programmes, is among those proposed to join a task force to rejuvenate Malaysia’s fortunes following back-to-back failures at the Commonwealth and Asian Games.
Malaysia only won six gold medals at the Glasgow Commonwealth Games in August, half of what they achieved at the New Delhi Commonwealth Games in 2010. The national contingent ended their Asian Games outing yesterday with five gold medals, three short of their target.
For the record, Malaysia won nine golds at the last Asiad in Guangzhou, China, four years ago.
“I will definitely help if my services are needed. I still have much passion for sports and feel sad we have failed so badly this year,” said Mazlan, who is also a member of the Sports Advisory Panel.
“I agree 100 per cent with our sports minister (Khairy Jamaluddin) who has called for a revamp of the NSC as well as the National Sports Institute.
“We need new blood and ideas if we are to move forward. If it means heads must roll, so be it.
“The decision to get the Australian Institute of Sports to audit the situation and agencies within the ministry is a good one.
“It is always better to get a third party to assess what we have done as then there will be no accusations of biasness.”
The ‘98 programme saw Malaysia win 10 gold medals at the 1998 Commonwealth Games in Kuala Lumpur.
It was followed by the Gemilang 2001 programme which saw Malaysia coming out tops in the 2001 Kuala Lumpur SEA Games with a record 111 gold medals.
Mazlan also initiated the Gemilang 2006 programme and started developing plans for the 2010 Commonwealth and Asian Games before retiring in 2005.
He was succeeded by Datuk Dr Ramlan Aziz (2005-2007) and Datuk Seri Zolkples Embong (2007-present).
Malaysia mazlan ahmad National Sports Council National Sports Institute Sports