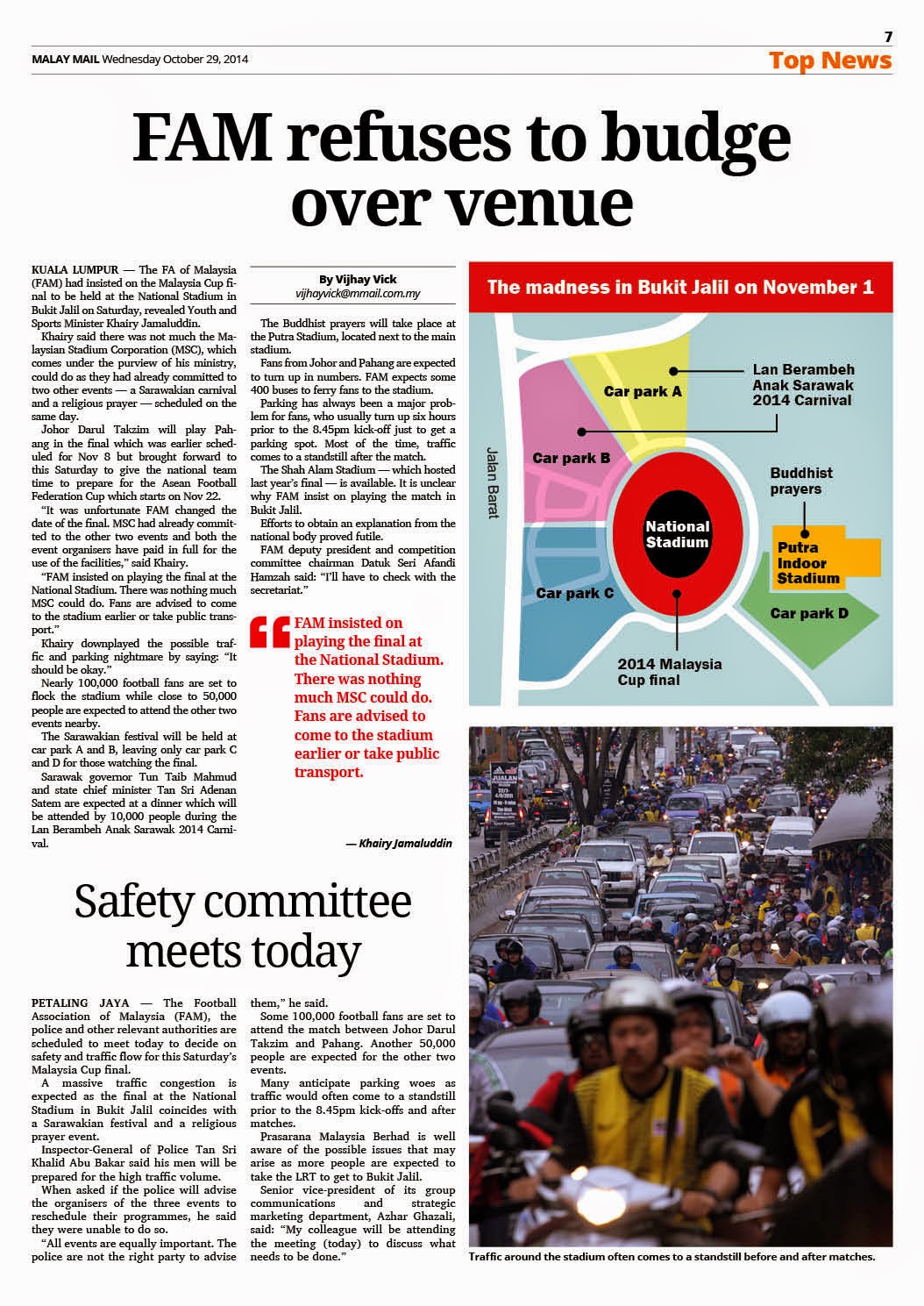 KUALA LUMPUR — The FA of Malaysia (FAM) had insisted on the Malaysia Cup final to be held at the National Stadium in Bukit Jalil on Saturday, revealed Youth and Sports Minister Khairy Jamaluddin.
Khairy said there was not much the Malaysian Stadium Corporation (MSC), which comes under the purview of his ministry, could do as they had already committed to two other events — a Sarawakian carnival and a religious prayer — scheduled on the same day.
Johor Darul Takzim will play Pahang in the final which was earlier scheduled for Nov 8 but brought forward to this Saturday to give the national team time to prepare for the Asean Football
Federation Cup which starts on Nov 22.
“It was unfortunate FAM changed the date of the final. MSC had already committed to the other two events and both the event organisers have paid in full for the use of the facilities,” said Khairy.
“FAM insisted on playing the final at the National Stadium. There was nothing much MSC could do. Fans are advised to come to the stadium earlier or take public transport.”
Khairy downplayed the possible traffic and parking nightmare by saying: “It should be okay.”
Nearly 100,000 football fans are set to flock the stadium while close to 50,000 people are expected to attend the other two events nearby.
The Sarawakian festival will be held at car park A and B, leaving only car park C and D for those watching the final.
Sarawak governor Tun Taib Mahmud and state chief minister Tan Sri Adenan Satem are expected at a dinner which will be attended by 10,000 people during the Lan Berambeh Anak Sarawak 2014 Carnival.
The Buddhist prayers will take place at the Putra Stadium, located next to the main stadium.
Fans from Johor and Pahang are expected to turn up in numbers. FAM expects some 400 buses to ferry fans to the stadium.
Parking has always been a major problem for fans, who usually turn up six hours prior to the 8.45pm kick-off just to get a parking spot. Most of the time, traffic comes to a standstill after the match.
The Shah Alam Stadium — which hosted last year’s final — is available. It is unclear why FAM insist on playing the match in Bukit Jalil.
Efforts to obtain an explanation from the national body proved futile.
FAM deputy president and competition committee chairman Datuk Seri Afandi Hamzah said: “I’ll have to check with the secretariat.”
Bukit Jalil FAM final football johor darul takzim malaysia cup pahang