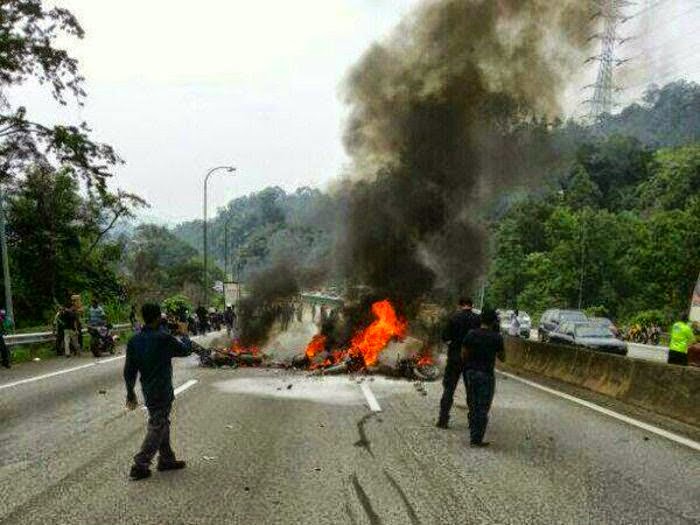 He was in his shorts and a pair of slippers. A sling bag hung lowly across his body. Strapped loosely on his head was an MS88 helmet, a favourite among those riding his type of motorcycle.

He zoomed past traffic with confidence despite missing by inches the side mirrors of several vehicles.

He could be a decently-paid designer working in a publication company or an engineering student at a university. But in the eyes of many, the rider is presumed to be a Mat Rempit.

Then there was this middle-aged man. His German-made sedan had a Bar Council emblem plastered next to his number plate. He found it convenient to push other motorists off the road, believing the fast lane of the North-South Expressway belonged to him.

He continuously flashed his lights from a distance as his actions screamed “get the hell out of my way”. He then cut from the fast lane to the left-most lane before heading back to where he came from, all within seconds.

Many would believe a man who can afford a car that is close to half a million ringgit would have some common sense.

These were just two glaring incidents that happened during my trip to Tampin, Negri Sembilan last Saturday. I am sure other motorists would have encountered such incidents on the road.

We are quick to judge and presume. Just like many of us did when two riders died after their high-powered superbikes collided with each other and burst into flames at KM25 of the Karak Highway on Oct 19 (pic).

While fellow two-wheel enthusiasts grieved the loss of their friends, some played the blame game.

“Those on plastic superbikes tend to ride like maniacs. Those riding cruisers are better riders”, or so they claim.

Then others blamed the machines. Some even found it necessary to suggest that those riding high-powered machines should undergo a course to turn them into better riders. Others suggested banning bikes more than 1,000cc.

Being a cruiser rider, I have enjoyed riding alongside cafe racers, superbikes and touring machines. With more than a decade of experience, I have learnt that it is not the type of bike you ride, but the rider.

I have seen those on superbikes adhering to the speed limit and cruisers ‘flying’ on the road. I have also seen drivers of modified turbo-charged compact cars competing with vehicles twice their cc just to prove a point.

I have colleagues and friends who rant in office or on Facebook over how some bus and lorry drivers would bully them on the road.

It does not matter what machine you ride or drive — a Honda EX5 or a BMW HP4, a Perodua Viva or a Ferrari. What is important is maintaining ethics and respecting other motorists.

To introduce a new course would mean the current course set by the Road Transport Department is not good enough. I (would like to) believe the department is strict when issuing licences. But I believe many will beg to differ.

Malay Mail, had yesterday, reported motorcyclists contributed the highest number of road deaths nationwide from January to September — with an average of 17 deaths daily. Statistics released by federal police showed 5,138 deaths were recorded on our roads, with 3,223 were motorcyclists.

However, this is not just about bikers. This is an issue concerning all road users. We must also not presume that riders or drivers of a certain vehicle fall into a certain category.

In reality, we need stricter enforcement and better education to encourage good driving or riding habits.

This will minimise accidents and help save lives. As Road Safety Council member Tan Sri Lee Lam Thye, had rightfully told Malay Mail, the authorities should continue strict enforcement so that motorists would respect the law.

Over the weekend I met several sports officials. The conversations centred around the doping saga involving a national shuttler and the person tipped to helm the National Sports Council (NSC).

The presumption among many is that whoever leads NSC would “lead” Malaysian sports.

“It is wrong to say that, but many tend to have that perception and presumption,” said a top official.

“I believe agencies and organisations in and out of the ministry have roles to play. It should be a collective effort to chart the success of our athletes, not a one-man show,” another official added.

No thanks to this presumption, the funding arm of the ministry has been faulted for the nation’s poor outing at the Commonwealth and Asian Games.

If only they had corrected the supposition from the start and allowed national sports associations and other stakeholders to play a more active role in the training and preparing of our elite athletes. That would then see a shared responsibility and as such the associations would also shoulder the blame if their athletes failed at major international meets.

Alas, that was not the case for some people found it right to cast the presumption that they dictated the local sports scene.

In reality, such a presumption contributed to their downfall.