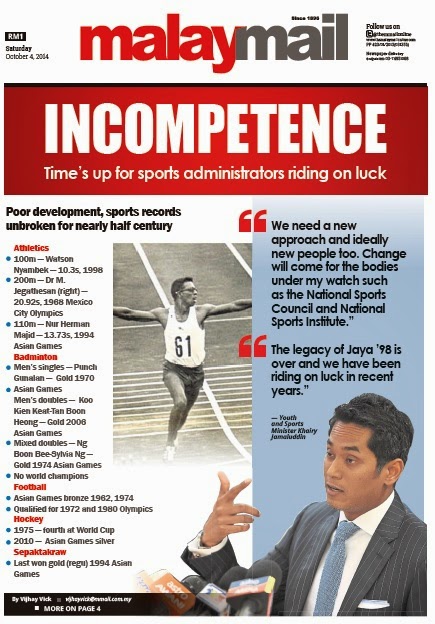 As published in Malay Mail today. Above is the front page of today's paper.
PUTRAJAYA -- There will be a major revamp within the National Sports Council (NSC) to address the ailing national sports scene, said Khairy Jamaluddin.
The Youth and Sports minister confirmed the industry was in dire need to new leaders as those in position had been "riding on luck" in recent years.
Experts from the Australian Institute of Sports (AIS) will be roped in to audit the situation and agencies within the ministry would see new faces as early as in January.
NSC is the funding arm of the ministry and is also responsible for the elite training programme of national athletes.
"We need a new approach and ideally new people too," said Khairy, after launching the Rembau Challenge at the ministry yesterday.
"For the national sports association it is left to them to decide. But change will come for the bodies under my watch such as the National Sports Council (NSC) and the National Sports Institute (NSI).
"The legacy of Jaya '98 is over and we have been riding on luck in recent years. We need something fresh to move forward," he said.
On Wednesday, Mailsports reported that Khairy was already on the look out for personnel to fill key positions in the NSC after poor outings at the recent Commonwealth Games in Glasgow and the Asian Games in Incheon, South Korea, that concludes today.
Malaysia won six gold medals in Glasgow, a far cry from the 12 gold-medal haul at the New Delhi Commonwealth Games in 2010. Today, the national contingent end their Asian Games outing with five gold medals, three short of their target.
For the record, Malaysia won nine gold medals at the last Asiad in Guangzhou, China, four years ago.
The Jaya '98 programmes, launched under then NSC director-general Datuk Wira Mazlan Ahmad in 1993, bore success after Malaysia won 10 gold medals at the 1998 Commonwealth Games in Kuala Lumpur.
It was followed by the Gemilang 2001 programme, which saw Malaysia coming out tops in the 2001 Kuala Lumpur SEA Games, bagging a record 111 gold medals.
Mazlan also initiated the Gemilang 2006 programme and started developing plans for the 2010 Commonwealth and Asian Games before retiring in 2005.
He was succeeded by Datuk Dr Ramlan Aziz (2005-2007) and Datuk Seri Zolkples Embong (2007-present).
It is learnt the ministry would also initiate a similar programme to chart the fortunes of our athletes for the 2018 Commonwealth and Asian Games. The task force would also oversee the athletes' preparations for the 2017 SEA Games.
On Tuesday, Khairy conceded the nation was relying on the same faces including the likes of shuttler Lee Chong Wei, squash queen Nicol David and cyclists Josiah Ng and Azizulhasni Awang in international competitions.
Khairy Jamaluddin Malaysia National Sports Council National Sports Institute Sports